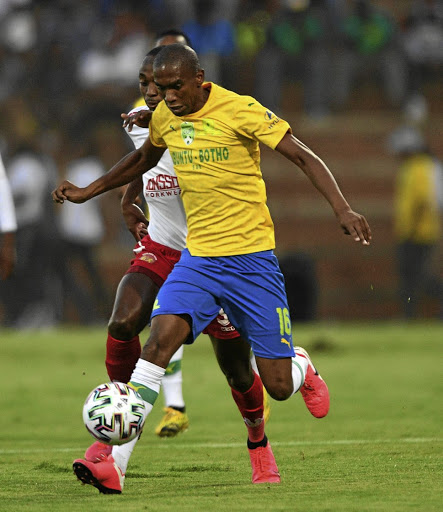 Anele Ngcongca of Mamelodi Sundowns feels he was doing great this season before the coronavirus.
Image: Sydney Mahlangu/BackpagePix

There seems to be conflicting stories around Anele Ngcongca's move to Belgium.

After Belgian second-tier side KSV Roeselare announced on Monday that Ngcongca has signed a two-year deal with the club, his agent Mike Makaab has denied that the player has moved.

Mamelodi Sundowns have also remained silent on the supposed move for Ngcongca.

Roeselare released a statement claiming the 32-year-old is returning to the country where he spent 10 years with Belgian giants Racing Genk.

But Makaab insists Ngcongca is still part of Sundowns team preparing for the resumption of the league next month.

"Anele has signed a new contract with Sundowns and honestly, I don't want to give you more comment than that because I was involved in a new contract," Makaab told Sowetan yesterday.

Asked if he has seen Ngcongca wearing a Roeselare jersey posted on social media, Makaab insisted that the right back is still a Sundowns player.

Belgium second division side KSV Roeselare have confirmed the signing of Mamelodi Sundowns and Bafana Bafana right-back Anele Ngcongca on a two-year ...
Sport
9 months ago

"You can photoshop things like that. I don't understand, to be honest with you. I can only tell you categorically that he has signed a new deal with Sundowns and not today [but] more than a month ago."

Ngcongca said the move was "possible" when Sowetan asked him through a WhatsApp text earlier this week.

But he could not be reached for comment yesterday and didn't return our calls.

Sundowns communications manager Shupi Nkgadima said they will release a statement about Ngcongca situation when everything is sorted.

"It will be a statement from the player that we will issue. He will talk on the issue hopefully today [yesterday] in the afternoon, if not tomorrow [today]. He will talk, not me or Yogesh Singh [general manager]."