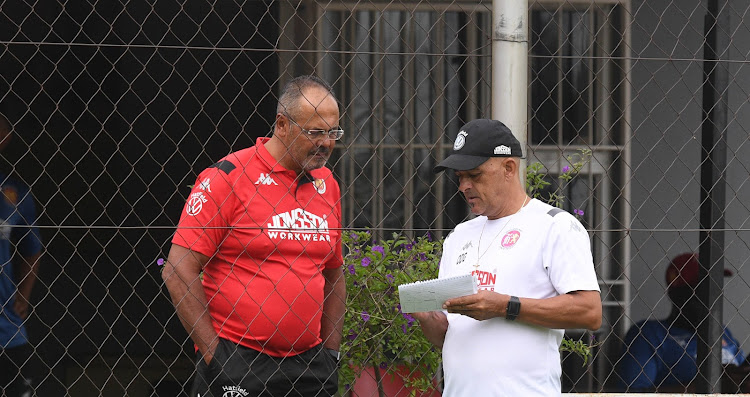 Highlands Park director Larry Brookestone (L) in a discussion with head coach Owen da Gama (R) at the club's training base in Johannesburg on March 11 2020 just before the coronavirus-enforced lockdown kicked it.
Image: Sydney Mahlangu/BackpagePix

Maritzburg United and Highlands Park say they were ready as early as Sunday July 12 to send their teams to the biological safe environment (BSE) that the Premier Soccer League (PSL) has set up in Gauteng to complete the 2019-20 season.

PSL clubs are expected to fork out more than a R1m (and some with 50 members‚ well over R2m) to keep their players and staff in the BSE‚ where the top-light 16 teams must play the remaining 54 Absa Premiership and three Nedbank Cup games to conclude the season.

The 16 teams campaigning in the GladAfrica Championship (first division) have 50 matches to finish their own season‚ although it remains to be seen whether they’ll all agree to go into the bubble which was supposed to see the games starting on July 18.

The SA Football Association (Safa) and the PSL are yet to finalise the resumption date after disagreement on a re-start date.

A middle ground date of July 25 might be agreed upon this week‚ with the Nedbank Cup semifinals kick-starting the proceedings as was expected on July 18.

Maritzburg boss Farook Kadodia and his Highlands counterpart Larry Brookstone said as much as it was going to cost their clubs an arm and the leg to finish the season‚ club bosses had no option but to pay the hotel bills and get on with the season.

“The reality is that without having any income other than the PSL grant‚ it’s quite difficult to survive‚” said Kadodia‚ whose clubs was inside the top eight with six league games to finish the season when the PSL was halted due to the outbreak of the coronavirus in mid-March.

“We’ve managed to pay the players and everyone full wages while we’ve been waiting (for four months) to restart the season.

“The longer we’re taking to finish the season‚ the (higher) the costs are escalating.

"I know the bubble is going to be a huge cost and it’s going to eat into our budget for next season‚ but there’s nothing we can do. We have to finish the current season.

“We planned to leave Maritzburg on Sunday (July 12)‚ that’s what our plan was.

"All the planning had been done and we know that not everyone will be in the best of fitness.

“But the reality is that we’re doing this under difficult circumstances and we all have to overcome it.”

While the PSL will allow clubs to take as many as 50 members into the bubble‚ Kadodia‚ whose club has no main sponsor‚ said they can’t afford that number.

“We’ll have under 40 people but we haven’t finalized the figure that we’ll have to pay for the hotel costs‚ but we’ll be under 40‚” he said.

Brookstone said he was equally looking forward to finish the season despite all the costs that will come with it.

“Yes we’re ready to go‚ whenever they say we must go‚ we’ll go‚” said the Highlands chairman whose club is also fighting to finish in the top eight for the second season running.

“We did cut salaries for a short period of time. We’ve cut salaries and we’ve had to retrench a few people but we’re back to normal now.”

Brookstone said the issue of paying for the costs of going into the bubble was always going to be a burden to be handled by the club owners.

“It’s not somebody else’s responsibility. I do understand that it’s going to be very difficult for NFD teams‚ hey‚ but you bear in mind that they’ve got the very same expenditure as the PSL teams and they have a materially lesser income (R500,000.)

“But for them it’s going to be very hard.”

Brookstone said they anticipate taking between 27 and 30 players‚ and eight to ten supplementary staff into the bubble.

“We’ll keep an additional ten players training in Johannesburg outside of the bubble in case we have a problem. But we won’t put 50 people in straight away.

“Safa‚ PSL and the government must come into a decision and tell us when we’ll go. The fact of the mater is that it is what it is and it doesn’t matter what I think.

“The most important matter is we try to get on to the field somewhere between the 1st and 6th of August.

“I think that’s the most important thing for the teams‚ for the PSL‚ for Safa and for the government‚ fans and all the stakeholders.

“I really think it’s important for the people to have a feel good factor about having to watch football on TV.”