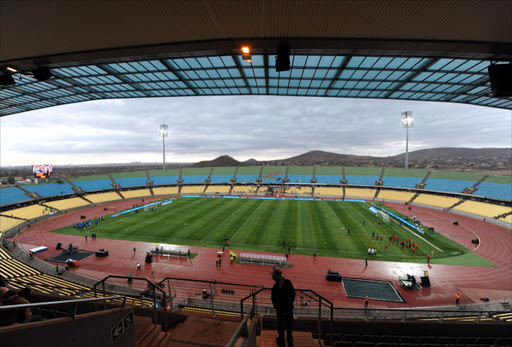 A senior official in the North West department of arts‚ culture and sport says the province is ready to host the remaining Premier Soccer League (PSL) fixtures that are expected to be played in a "bio bubble" camp in the coming weeks.

The league is yet to disclose the venue for the resumption of the season but coordinator in the office of North West MEC Galebekwe Tlhapi Hendrick Metsileng said the province is ready to step in as host of the matches.

“We are willing and ready to host PSL matches in our province‚” said Metsileng.

“We have given them information regarding our readiness in terms of accommodation‚ stadiums‚ training facilities and other related logistics.

"What is left is for them to come to verify information that we have given them so that they satisfy themselves.”

Metsileng said they have the capacity to host all the remaining matches involving the topflight and lower tier sides.

“In terms of the facilities that we have‚ we think we will be ready to host all the 32 teams but it depends on what the PSL wants.

“We will hear from them what they want. If we can’t host the PSL‚ then we will definitely host NFD matches but if they want to bring all the matches to the North West‚ then we have enough facilities to host them.

"We will be able to handle the workload that will be there from the players‚ officials and other related logistics‚” said Metsileng.

Metsileng said four stadiums would be ready to host the matches.

"The next step for the PSL is that if they are happy with the information that has been provided to them‚ they must come to the province and have discussions with us.

"That is the next step that we are awaiting.

“Our Covid-19 cases are low and we will not be having fans inside the stadiums.

"With regards to training venues‚ I believe that the PSL has identified a number of schools that have facilities that can be used as training venues.

"The Royal Bafokeng Stadium can host matches tomorrow but we will have to do some work on Olympia Park Stadium‚ Moruleng Stadium and Mogwase Stadium.

Metsileng said they have Sun City Resort‚ Royal Marang Hotel and many lodges to accommodate all the 32 teams and matches can take place at Royal Bafokeng‚ Olympia Park‚ Moruleng and Mogwase Stadiums.