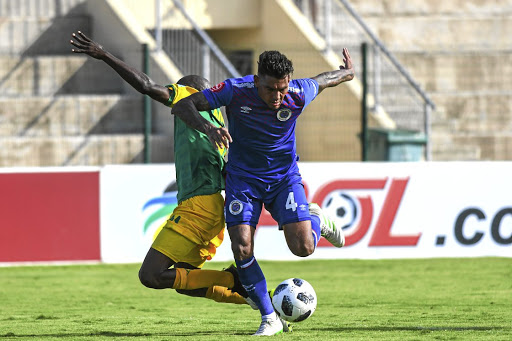 Clayton Daniels of SuperSport United and Lerato Lamola of Golden Arrows might have to wait longer to engage in similar action in the Absa Premiership again.
Image: Darren Stewart/Gallo Images

Some national first division teams struggling to finance the mandatory tests for Covid-19 and hiring a compliance officer could be the main reason why the Premier Soccer League has yet to decide on the date for resumption of local football.

"We have submitted all documentation and have complied with what the PSL says the government requires for us to return to training. But we've been told all the 32 clubs must first comply.

"Unfortunately, some of them find the process too expensive and they can't afford to hire a compliance officer," said a PSL club official who was part of Tuesday's Board of Governors meeting.

The PSL, however, has indicated training can only resume once all health protocols are met. Covid-19 tests can cost between R45,000 and R50,000 per club, depending on squad size.

"It can't be the same for every club because financially we are not all the same. Some clubs are trying to cut corners. All these things - sanitising, testing players and employing a compliance officer - cost a lot of money," the official said.

Not all PSL clubs Covid-19 compliant

While yesterday's Premier Soccer League (PSL) board of governors (BoG) meeting couldn't agree on the exact dates of training and play resumption, ...
Sport
2 years ago

Yesterday, PSL acting chief executive Mato Madlala said the league was yet to discuss and agree on the actual date of restarting the season. But she confirmed any club that submits satisfactory plan that meet government's stringent guidelines, gazetted by sports ministry a fortnight ago, can resume training immediately.

"We didn't discuss the issue of restarting the league. It was not on the agenda. I cannot say when we'll resume, but we haven't yet discussed the resumption date. I don't know when we will actually discuss it," Madlala said yesterday.

"Teams can return to training any time after submitting their compliance plan as per government's directive. Things like the testing of players and staff must be done first, from there they can train. It all depends on the readiness of each team."

As revealed by one club representative who was part of Tuesday's BoG meeting, the league plans to resume sometime in the middle of this month in KwaZulu-Natal after the province was chosen as the biologically safe environment (BSE) to wrap up the season.

PSL drafted a document titled "Covid-19 health and safety directive return to training 2019/20 season", which lists the measures clubs will need to follow before training can officially resume.

Tuesday's meeting also confirmed Michael Murphy as chief compliance officer, who will ensure that clubs meet all set health protocols for training and resumption of the programme.