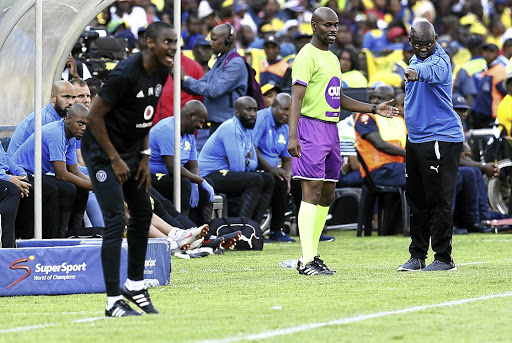 After his loan spell at Chippa United ended unceremoniously this week, Rulani Mokwena is said to be hoping to return to Mamelodi Sundowns.

Mokwena had joined Chippa on an unprecedented loan from Orlando Pirates in March.

The Soweto-born mentor only managed one game, a goalless stalemate at Bidvest Wits the same month he was appointed, before Covid-19 wrecked havoc on the current campaign.

Mokwena now finds himself in a position of disfavour as his Pirates contract is also said to be lapsing at the end of the month, having joined the Buccaneers as then coach Milutin Sredojevic's deputy in 2017.

In reasoning why they opted against retaining Mokwena, Chippa through their COO Lukhanyo Mzizi, as quoted by Sowetan's sister newspaper The Herald, Chippa said: "In the midst of uncertainty and in spite of everything, including the announcement by the sports [arts and culture] minister [Nathi Mthethwa], we as a club were uncertain as to when we will return to play.

"His [Mokwena's] representatives kept enquiring to make sure they were certain about his future, we needed to let them know."

As his relationship with current Pirates coach Josef Zinnbauer looks rather untenable, Mokwena is believed to be wishing to rejoin Sundowns, where he worked with head coach Pitso Mosimane before crossing over to the Soweto giants.

"His [Rulani's] Pirates deal expires at the end of the season and he's now trying to go back to Sundowns because of his good relationship with Mosimane. He and Zinnbauer are not friends at all," said the source.

"It remains to be seen if Sundowns will welcome him back, but they still hold him in high regard, especially Mosimane and president Patrice Motsepe."

Before he was shipped out on loan, Mokwena and Zinnbauer worked together in just one match, the German's maiden fixture at the club, a 3-1 win over Black Leopards last December.

In his previous interviews, Mokwena, 35, hinted that, from the onset, there was never a good vibe between him and Zinnbauer.

"When the new Pirates coach [Zinnbauer] arrived, and of course, through words and certain things, I could see that it was going to be a difficult environment [to work in]," Mokwena told Lesedi FM in April.

Attempts to get comment from Mokwena and Pirates' administrative manager Floyd Mbele proved futile as they never answered their phones.

Interim mentor is yet to decide on his next move.
Sport
2 years ago

The future of coach Rulani Mokwena is up in the air with Chippa United's management due to decide his future this week.
Sport
2 years ago
Next Article