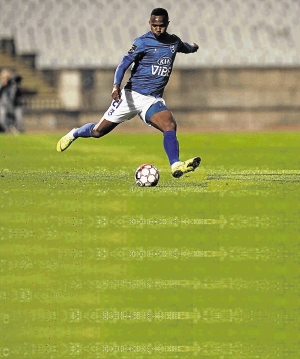 Thibang Phete of Belenenses in action during a Liga NOS match against CS Maritimo in February in Portugal. / Gualter Fatia/Getty Images

Farouk Khan's Stars of Africa Academy has sent some players overseas at a very young age, and he believes this is the only way to improve SA's football national teams.

Some of his exports who left these shores when they were teens include May Mahlangu, Luther Singh, Thibang Phete and Tlotlo Leepile, who all are still based in Europe, but the highly regarded development coach yearns to see more follow suit.

While Khan worked hard to convince the players and their immediate families to take the risk of pursuing a career abroad, he bemoaned the cynicism that's always associated with exporting young talent.

"I truly believe the only way to get our standard higher is to export more young players," Khan told Sowetan. "And you don't have to send them to the big leagues, because it's tough to make it in the English Premiership, La Liga or the Bundesliga."

Rather, Khan believes, sending players to countries such as Portugal and Sweden will do a whole lot of good to the SA national sides.

21 in books of Portuguese clubs.
Sport
2 years ago

Libya have been very quiet in the build-up to the African Nations Cup qualifier against South Africa in Durban on Saturday as they prepare to resume ...
Sport
3 years ago

"The teams in those countries are mainly looking for players to sell on. They know they can't compete with the bigger teams, so their model is to develop young talent and pass it on. Look at how players like Edersen and Bernardo Silva ended at Manchester City. They were developed at Benfica, who made a huge profit from their sales. We need to understand the significance of developing our players out of their comfort zone."

Of Stars of Africa's exports, only Mahlangu and Singh have made it to Bafana, but Khan is convinced others should have graduated to the national side.

"Bradley Ralani (now at Cape Town City) was in the Kaizer Chiefs development at 17 years of age. They let him go and we sent him to Helsingborg in Sweden. He was making waves there for years. It's unfortunate that he was never considered for any of the national teams."

Khan is determined to see Portugal-based Phete, who turns out for Belenenses, not suffering the same fate of national rejection.

"He's very talented but because only a few people from SA have seen him, he's never been selected. I really hope (national coach) Molefi Ntseki will one day look at him."

Phete, 26, who hails from Kimberley, in Northern Cape, played for Milano United in the NFD before being transferred to Europe.