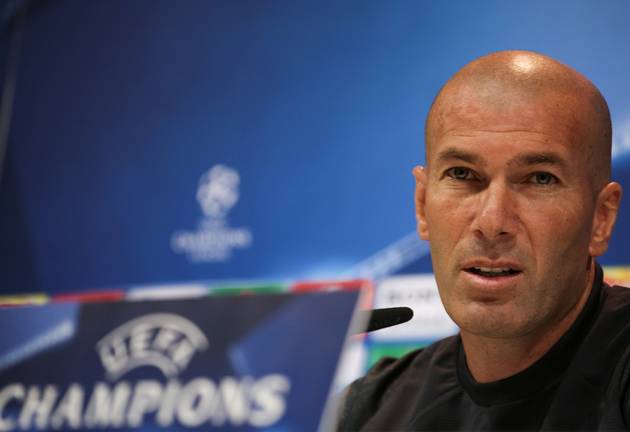 Real Madrid coach Zinedine Zidane said he was disappointed that he was only asked about the referee's decisions after his side earned a 2-1 victory at Real Sociedad on Sunday to climb above Barcelona and top La Liga.

The day before the game, Zidane had been forced to defend his team against a suggestion from Barca defender Gerard Pique that decisions were going Madrid's way after their 3-0 win over Valencia, in which Rodrigo Moreno had an opening goal ruled out.

"It annoys me that at the end of the day people are only talking about the referees as if we did nothing out on the pitch," Zidane told a virtual news conference.

"But we cannot control what people will say. We win matches on the pitch and that's what we did today. It was a deserved victory."

Sergio Ramos scored the opening goal just after the break with a penalty after a contentious foul on Vinicius Jr while Sociedad had an Adnan Januzaj strike ruled out for a positional offside against Mikel Merino.

Karim Benzema then doubled Madrid's advantage in the 70th minute after controlling a cross with the top of his arm, the goal being awarded following a VAR review.

"I didn't see the plays but I've been told the penalty decision was correct and that Benzema's goals were legal," added Zidane. "I don't get involved in controversies because that's the referee's job. I just want to think about our deserved victory.

"I would prefer to talk about football and the match, I can't say anything else about the other things."

Having won all three matches since the season re-started after the hiatus caused by the new coronavirus, Real now lead the title race due to a superior head-to-head record over Barcelona but Zidane said there was still a long way to go.

"We haven't achieved anything yet even though we've got nine points from nine," he said with another eight rounds of Liga matches remaining this season.

"It's going to be difficult right until the end. We always want more and you have to recognise how great our attitude was today. We saw a team that always wanted to win."