Safa to ensure leagues at amateur level complete their seasons 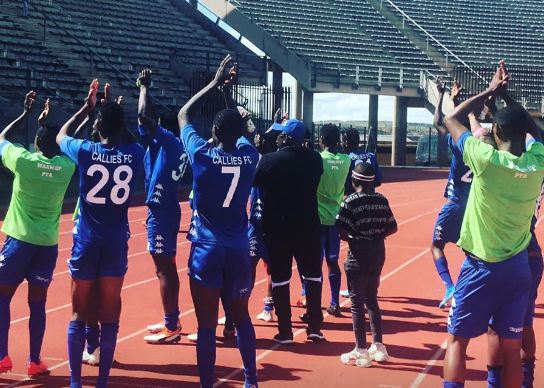 Pretoria Callies FC players applauds their fans at their Giant Stadium in Soshanguve, in Tshwane, after a 1-1 draw against Baberwa FC on January 25 2020. Callies are poised to win the ABC Motsepe Gauteng league and participate in the national playoffs as they lead the log with five points with seven matches remaining.
Image: Pretoria Callies FC/Facebook

Motlanthe said Safa medical officer Dr Thulani Ngwenya and general manager of football Mzwandile Maforvane have been tasked with making sure that teams are compliant with health and safety protocols when it’s safe for football to return.

Motlanthe was appointed as CEO until December during the National Executive Committee (NEC) meeting at the weekend where Ria Ledwaba was controversially removed as vice president.

“The NEC decided that leagues at amateur level must complete their seasons‚ so we appointed Dr Ngwenya and Mzwandile Maforvane to advice the competitions committee on health and safety protocols of safe return‚” said Motlanthe‚ who added that they will continue to work with government.

"We will monitor how government eases the lockdown levels in the coming days and weeks and we will take it from there.

"All amateur leagues remain suspended until the end of the lockdown or when the general environment is conducive to do so.

“You must remember that in amateur leagues they play on open fields and you can’t necessarily play behind closed doors people will come to watch.

"Those are some of the logistical issues that we have to negotiate around and ensure that we don’t put anyone’s life in danger.

Meanwhile‚ Safa have issued a warning to people who organise social games which have been reported around the country since the country moved to level three of the lockdown.

“It was also reported that in the absence of official competitions in the regions and Local Football Associations (LFAs)‚ which are similarly suspended‚ the phenomenon of social games has emerged in some parts of the country.

"It was emphasised that this is in violation of lockdown regulations and the authorities must act to avoid a spike in Covid-19 infections.

"On the National Soccer League (NSL)‚ SAFA will continue to work with the NSL to develop further proposals for submission to the government on the way forward.”