'Patrice Motsepe's money did not make me', Pitso Mosimane says 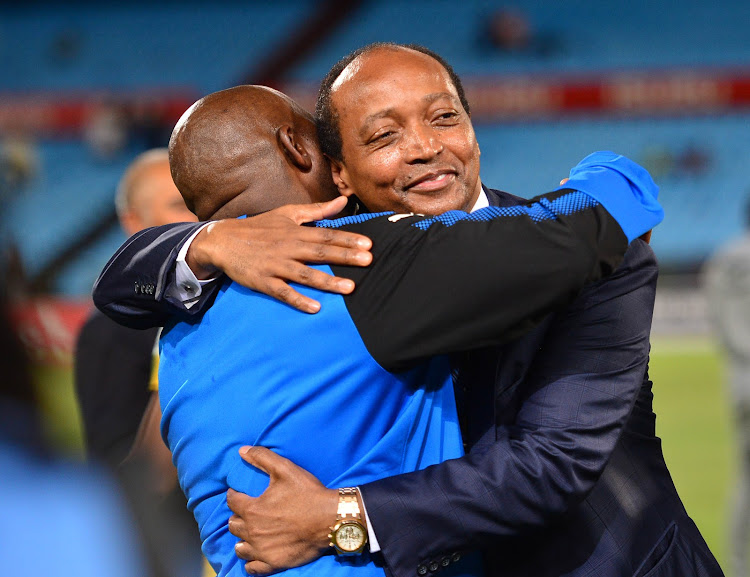 Pitso Mosimane says his success as a coach would still have been possible even without Patrice Motsepe's financial backing.

The Mamelodi Sundowns coach has transformed himself into the most successful coach in SA in recent times, with his cup haul including four Premiership titles in the past six years, and a CAF Champions League.

But some have questioned if Mosimane would have enjoyed success at a club with modest resources, seeking to reduce his accomplishments merely to Sundowns owner Motsepe's generosity with a blank cheque that allows the coach to recruit top players.

"I have always had a vision," Mosimane told Sowetan. "When I was at SuperSport United [from 2001 to 2007], I took the team to the CAF Champions League group stages. We made six cup finals in a row. Where were those millions of rand then? People talk of the millions today, and not of the fact that when I took over SuperSport they were in the relegation zone."

He pointed out that even Sundowns were struggling before he took charge in December 2012, having found them languishing in a lowly position and trophy-less for seven years.

The Premier Soccer League (PSL) players will need a minimum of three weeks of training before they resume playing‚ Mamelodi Sundowns coach Pitso ...
Sport
1 year ago

Pitso Mosimane has lamented South African football's failure to build on the euphoria of World Cup 2010, the Mamelodi Sundowns coach questioning why ...
Sport
1 year ago

They have now won nine cups under him, and have not finished below second in his full seasons there.

"The truth is, Sundowns are not signing players only now. They used to parade 10, 11 new players every season. Even the president [Motsepe] has said it. But last year I signed only two players, [Mauricio] Affonso and Sammy Seabi."

Mosimane, who last month had his contract at Downs renewed until 2024, joined Sundowns on the back of a hiatus after he had been sacked by Safa as Bafana Bafana coach in June 2012. He reckons he would have been successful even at national level.

"I begged Safa not to fire me, but they did. They were determined to get rid of me after that qualifier against Ethiopia. I said to them, 'we still have five matches to go, I can get the team to Brazil [for the 2014 World Cup]'."

Mosimane said Safa instead decided to dismantle the entire project that had started with Carlos Alberto Parreira's first arrival in 2007.

Safa had invested so much in me. They sent me to courses abroad. I was interim coach and then assistant coach to Parreira for the World Cup [2010]. But they didn't believe in my vision. We were drawing games against top nations like Ghana, Ivory Coast and Zambia, but Safa were swayed by some in the media. I admit I could have handled some matters better."

Mosimane said Sundowns were now reaping the benefits of his hard work.

"I've got the experience, first with SuperSport, then Bafana. I was at the Africa Cup of Nations with Ted Dumitru [in 2006] and with Parreira in 2008. I was involved in the World Cup. Sundowns are benefiting from that experience. No, please, it has nothing to do with [Motsepe's] money."