OUTsurance keeping an eye on Premiership sponsorship vacated by Absa 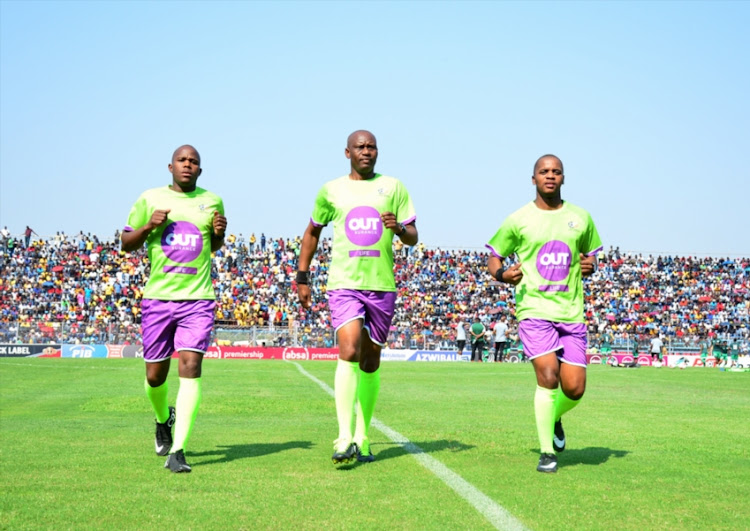 Insurance giants OUTsurance‚ who have a disputed R50m sponsorship with the SA Football Association (Safa)‚ are closely watching developments in the Premier Soccer League (PSL)‚ SowetanLIVE is informed.

Sunday Times reported this weekend that DStv is a frontrunner to replace Absa as headline sponsor of the PSL from the 2020-21 season.

However SowetanLIVE is informed that the pay-television company owned by MultiChoice might have competition from financial services investment holding company OUTsurance.

The SA Football Association (Safa) announced a five-year sponsorship for match officials in September 2018 that saw referees kitted in colourful OUTsurance logos and colours‚ but the deal created conflict with the association's special member‚ the Premier Soccer League (PSL).

The PSL argued that the partnership was in conflict with the rights of its headline sponsors Absa and Nedbank‚ who have similar consumer product offerings to OUTsurance.

An ugly public spat between Safa and the PSL ensued.

The PSL argued that it should have been consulted as the OUTsurance deal infringed upon the exclusivity afforded to Absa and Nedbank.

But Safa would have none of it‚ claiming as the mother body is do not need permission from its special member to sign up with any sponsor of their choice.

It was decided in August last year that the matter will be settled through an arbitration process‚ an outcome of which will be binding and final.

With main sponsors Absa ending their 13-year partnership with the PSL at the end of the current Covid-19 ravaged season‚ the resistance to OUTsurance’s entrance into football may be softened.

SowetanLIVE has learned that OUTsurance would be too averse to the arbitration award going against their deal with Safa‚ which could pave the way for the insurance giants to dangle a carrot in front of the PSL.

The arbitrator‚ advocate Paul Pretorious‚ said he would hand down his award “soon”‚ while indications are that and arbitration award will be handed down before end of this month.

Dario Milo acted as the PSL attorney during arbitration. “I can’t help you until I get permission from the PSL‚” Milo said.

OUTsurance head of client relations Natasha Kawulesar told SowetanLIVE that the insurer is awaiting the arbitration decision in the dispute between Safa and the PSL before making any decisions on further investments in football.

“We are awaiting the finalisation of the matter between the PSL and Safa before we make any further commitment to football‚” said Kawulesar.

“We do still have two years in our current contract [with Safa]‚ which expires in July 2022.”

Given that the ongoing dispute between Safa and the PSL over the OUTsurance referee’s sponsorship was lodged as a result of Absa in the main as headline sponsors‚ Kawulesar was noncommittal when pressed if the insurer may look at the bank’s exit as an opportunity to make inroads into professional football.

“As I have already said‚ at this stage we are not making any further commitment to football‚” she said.

Despite the outbreak of the Covid-19 pandemic in South Africa‚ Absa’s departure would have left many companies alert to the opportunities that can be presented by the exposure that comes with sponsoring the Premiership.

Kevin Watt‚ the MD of Nielsen Sports in Africa and Asia‚ told the Sunday Times that whoever was replacing Absa as the main sponsor stood to gain maximum exposure for the company.

"There's no sponsorship that resonates as strongly with a broad range of South Africans as the Premiership‚" Watt said.