Tributes continue to pour in for 'charismatic' Mokoena: Chiefs coach Middendorp saddened by his loss 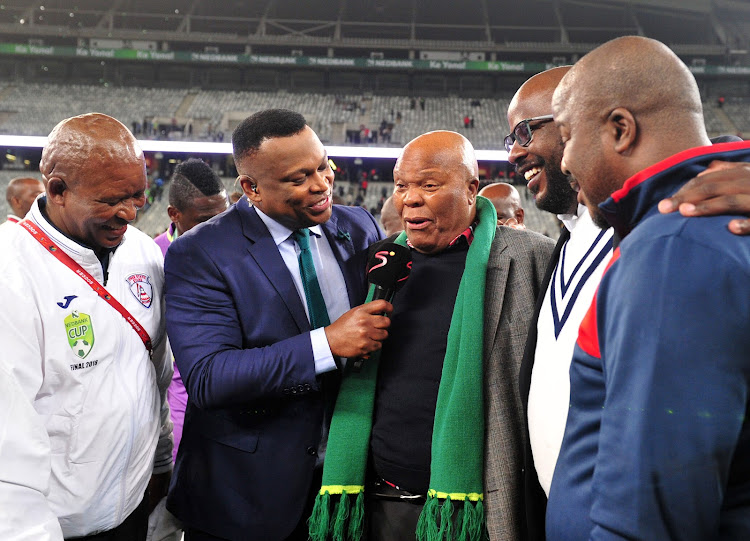 The family confirmed that Ntate Mike Mokoena succumbed to cancer after a long battle. He was receiving treatment at Sandton Oncology Clinic when he departed in the early hours of Wednesday, the family confirmed.
Image: Ryan Wilkisky/BackpagePix

“I coached Free State Stars in 2015 and I was profoundly sad when I learnt of Mr Mike Mokoena’s death‚” said Middendorp.

“He was a charismatic leader who showed power legitimised on the basis of exceptional personal qualities. In our regular technical team meetings‚ Mr Mokoena simply said what was needed to be said directly and straightforwardly.

"At the same time‚ I enjoyed how he inspired people to work together and how he created a team with a goal oriented atmosphere. It was always a pleasure and I am blessed to have had the opportunity of be a coach at Free State Stars in 2015.”

The Mokoena family confirmed in a statement that the one of the founding members of the National Soccer League died after a long battle with cancer.

"The Mokoena family is saddened by the passing on of our father and founder of Free State Stars football club‚ Ntate Mike Mokoena‚" the family said.

"He succumbed to cancer after a long battle. He was receiving treatment at Sandton Oncology Clinic when he departed in the early hours of Wednesday."

Tributes continued to pour in for Mokoena as the sports world reacted to the news of his passing on Wednesday.

“Bloemfontein Celtic would like to pass on its deepest condolences to Free State Stars‚ the Mokoena family and friends on the passing of their chairman and loved one Mr Mike Mokoena. Though our words can do little‚ we hope our thoughts and prayers will support you in this difficult time.”

Chiefs said on their website the club's chairman Kaizer Motaung reacted with shock upon receiving the news of the passing of his colleague and friend.

“Chairman Kaizer Motaung has extended his heartfelt condolences to the Mokoena family. Motaung reacted with shock to the news of the passing of FS Stars chairman Mr Mike Mokoena. He describes Mokoena as a long time colleague in football and a friend. Ha moya wa hae o phomole ka kgotso‚” said Chiefs.

“Football has lost an amazing man. I have lost a great friend of many years. To the family‚ you are in my prayers during this difficult time. He will never be forgotten. Ntate Mokoena may your soul RIP.”

“We’d like to send our deepest and most sincere condolences to the family and friends of Free State Stars chairman Mr Mike Mokoena following news of his passing. Mr Mokoena was one of the founding members of the NSL and he will be sorely missed.”

“We are very saddened to hear of the passing of Free State Stars chairman Mike Mokoena. Our heartfelt condolences go out to the bereaved family and friends‚” added a statement from SuperSport United.

The Mokoena family will release more details regarding funeral arrangements in the coming days.