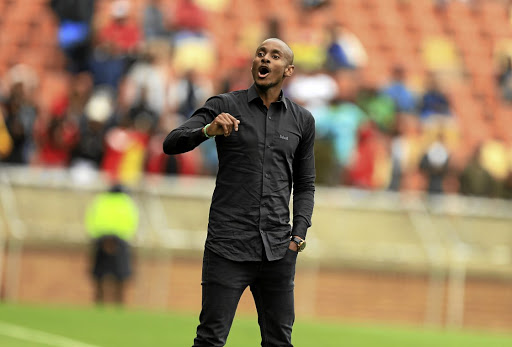 Chippa United coach Rulani Mokwena's contract comes to an end at the end of this month.
Image: Philip Maeta/Gallo Images

The future of coach Rulani Mokwena is up in the air with Chippa United's management due to decide his future this week.

It is not clear whether the Eastern Cape club will renew Mokwena's loan contract with the team, which lapses at the end of June, or let him go.

Chilli Boys chief operating officer Lukhanyo Mzinzi yesterday said: "The coach's contract is coming to an end this month, along with quite a number of other employees including the players.

"We are sitting as the club and looking into all of those things. In particular, the renewal of the coach's contract is not a decision that we will take alone, we will have to take the decision with Orlando Pirates [who loaned him to Chippa].

"But we are looking into these things and we will issue a statement soon."

Malesela has had numerous stints at the club and his name surfaces whenever there is coaching uncertainty at Chippa United.

Chippa United coach Rulani Mokwena believes one positive effect of the coronavirus is that it will mean Sooth African football‚ and the country as a ...
Sport
2 years ago

He has also been linked to GladAfrica Championship side Tshakhuma Tsha Madzivhandila (TTM), who recently said they had purchased Bidvest Wits' PSL status but would not be having Gavin Hunt as their coach.

However, TTM have denied speculations about Malesela.

Mokwena joined the Port Elizabeth-based Chippa on a short-term loan deal from Pirates in March to help the team finish the season after the surprise resignation of Zimbabwean coach Norman Mapeza.

Mokwena, who was Pirates interim haed coach until December 2019, has only been in charge of one game at Chippa, a goalless draw against Bidvest Wits.