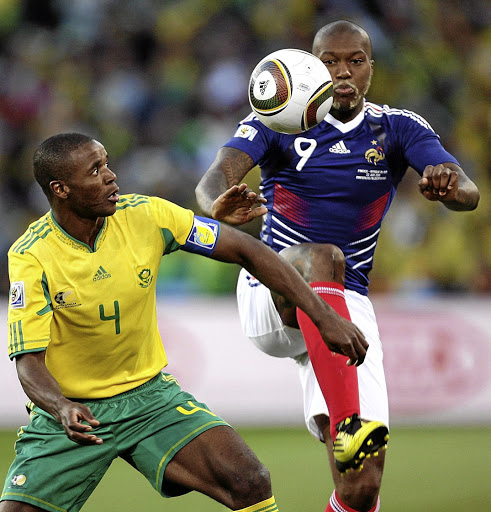 Bafana Bafana's 2010 World Cup captain Aaron Mokoena says he warned his teammates about then-Ajax Amsterdam striker Luis Suarez's ability to dive and win penalties‚ and was not surprised when that came to be a reality in the South Africans' crippling defeat 10 years ago.

Exactly 10 years ago‚ on June 16‚ 2010‚ at a freezing Loftus Versfeld the host nation's World Cup dream received a shattering blow as‚ following their opening 1-1 draw against Mexico‚ they succumbed 3-0 to Uruguay.

Player of the tournament Diego Forlan's was immense on the night and had put the eventual semifinalists ahead with a perfect 24th-minute free-kick.

Bafana were battling their hearts out to earn a draw until‚ in the 76th minute‚ Suarez skipped over a lunging challenge by goalkeeper Khune and dragged a foot and dived. Swiss referee Massimo Busacca fell for the theatrics and pointed to the spot‚ red-carding Khune‚ with Forlan adding an 80th-minute second. Alvaro Pereira added a third in the 95th.

"People thought Uruguay would be a walkover‚ but look at the players they had‚" Mokoena recalled.

"They had experience. And of course the penalty that Suarez earned and the red card made it difficult to play against such a side.

"Before the game [Bafana coach] Carlos Alberto Parreira warned us that we were playing against a powerful team and‚ the fact that we lost 3-0 showed that they were absolutely a top side."

Small margins decided Bafana's exit in the opening round. It came on goal difference‚ as they finished level on four points with second-placed Mexico in Group A. Katlego Mphela hit the post in injury time against Mexico‚ and again with SA 2-0 up needing a 4-0 win against France in their final game‚ which Bafana eventually won 2-1.

"We were unfortunate. I think where we were really unfortunate was the penalty and Itumeleng Khune's red card‚" Mokoena said.

"I think that was a turning point for us. The Uruguay game was a deciding game because if we had come out with a draw‚ and then beaten France‚ we would have gone through.

"Definitely that wasn't a penalty.I knew Suarez was that type of player who would provoke any defender‚ would dive at any time‚ try to buy free-kicks‚ a penalty or yellow cards. And it happened.

"I had warned the boys that Suarez is that player who can dive. I had watched him play for Ajax. And the fact that he got that penalty and Khune red-carded‚ for me it wasn't a surprise.

"He dragged his foot. And Khune sat down a bit. That was the turning point and it was an unfortunate situation for us."

Suarez‚ who would go on to star for Liverpool and Barcelona‚ later infamously hand-balled on the line in the quarters to cost Ghana a place in the semis.