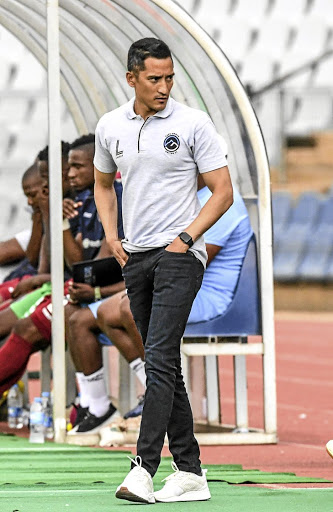 Maahier Davids (coach) of Cape Umoya fancies to see his team playing in the top-flight in the next two seasons. / Sydney Seshibedi/Gallo Images

However, those who've been following Maahier's coaching journey would agree there's more to the 34-year-old mentor than just being Fadlu's sibling.

The younger Davids epitomises the takeover of knowledgeable and well-educated budding coaches in SA who're destined for greatness.

Maahier, who holds a Uefa A licence, envisions himself ditching out tactics as a head-trainer in the top-flight in the next two seasons, preferably with his current club Umoya.

"On a personal level, I joined Umoya not just for a short haul. I didn't come here for a season or a few months," Maahier, who acquired his Uefa badge last September via the Northern Ireland Football Association, said.

"We have a long-term plan, part of the plan is to be in the big league within the next two seasons. We can do it."

The Capetonian has also set his sight on obtaining what is arguably the ultimate coaching badge on earth, Uefa Pro, in the near future.

"I have an ambition to do the Uefa Pro in the future. But there's a waiting period... I'll have to do more practical jobs as I am doing with Umoya, then I'll start the application process," Maahier stated.

Maahier cut his mentoring teeth at erstwhile Cape giant Santos, where he was the Under-11 coach for a season, before joining Ajax Cape Town's development structures in 2011.

"I coached Santos U-11s for one season, then I went to Ajax to be the U-17 assistant coach, I spent a year-and-a- half as an assistant and I became the head coach of the U-15 team," Maahier reflected.

The Umoya tactical also narrated how current Kaizer Chiefs coach Ernst Middendorp gave him a break in the Premiership, leading to linking up with his brother, Fadlu, at Maritzburg United in December 2016.

"I eventually took over as the reserve team coach at Ajax. I was at Ajax until 2015 where I got a call from coach Middendorp, asking me to be part of his technical team at Free State Stars," Maahier said.

"From there, I followed him to Maritzburg in 2016. We fought relegation and he left, leaving me there at Maritzburg to work with various coaches, including Fadlu, until I joined Pirates [as the first team advisor] in 2018 [until he joined Umoya last November]."

At Ajax, he played a big role in nurturing talents of players such as Rivaldo Coetzee, Yagan Sasman and Hashim Domingo, among many others, who're now succeeding in the PSL.

Maahier encourages aspiring and youth coaches to be on the ground.

"My message to young people who want to be coaches is that they must be out there, they must be practical... coach schools and local teams. You only grow by being practical."

The confirmation of the sale of Bidvest Wits to Tshakhuma Tsha Madzivhandila (TTM) has left Hunt fuming as it has emerged that the new owners will ...
Sport
1 year ago

Tshakhuma Tsha Madzivhandila (TTM) owner Masala Mulaudzi has completed the takeover of Bidvest Wits with its players but they will not be retaining ...
Sport
1 year ago
Next Article