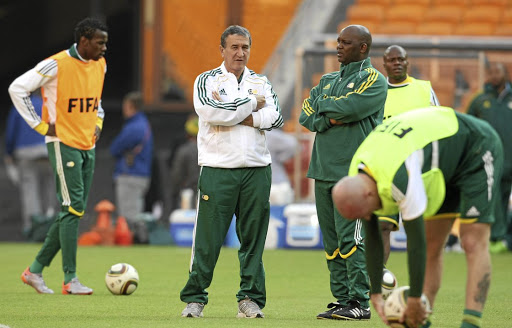 Bafana Bafana coach Carlos Alberto Parreira and his assistant Pitso Mosimane chat while players train one day before the kickoff of the Fifa World Cup at Soccer City in Soweto. / SYDNEY SESHIBEDI.

Pitso Mosimane has lamented South African football's failure to build on the euphoria of World Cup 2010, the Mamelodi Sundowns coach questioning why key lessons were not learnt from the global showpiece.

Mosimane was the only South African on the technical team as Carlos Alberto Parreira's assistant coach, when the country became the first African nation to host the World Cup a decade ago.

While he was delighted to have got the experience, Mosimane says South African football's failure to implement some of the basic logistics that made the World Cup such a flawless event remains a concern.

"Everything about the World Cup was perfect. Stadiums were packed, but not even one game was delayed because fans were stuck outside still trying to get in. Fans arrived on time and knew exactly where they were supposed to sit," Mosimane said.

South Africans should resist scapegoating then-coach Carlos Alberto Parreira for Bafana Bafana’s disappointing opening round exit as hosts of the ...
Sport
2 years ago

"Now we go for a warm-up, knowing the match is kicking off at 3pm, suddenly you're told, hold on, there's potential for a stampede outside. Why didn't we learn from the World Cup?"

Mosimane also added that match commissioners had become even more confused of late regarding protocol such as which dugouts teams have to occupy on matchday, whereas during the World Cup these were clearly marked.

"But what surprises me even more is that these match commissioners deny us the chance to water the grass before kickoff. Why? This helps the flow of play. It was done during the World Cup, it's done in big leagues. But clearly our match commissioners don't know this," he said.

Mosimane, nevertheless, remains proud to have been on the bench alongside Parreira as the tournament kicked off at Soccer City, with Bafana holding Mexico to a 1-1 draw after a Siphiwe Tshabalala scorcher was cancelled out by Rafael Marquez.

"It was an incredible experience," he recalled. "Many of us couldn't sleep the night before."

His role as Parreira's second assistant - along with Jairo Leal - was to scout Bafana's opposition. "It was difficult to get specific details about Mexico because they had used 35 players in the months before our match. But we knew that the big ones - Marquez, (Ricardo) Osorio, Carlos Vela, Giovanni dos Santos - would all start.

"We were nervous at the start of the match, but settled in later. Once Shabba scored, we were in control. We were unfortunate to concede with 12 minutes to go."

Bafana went on to lose the next match, against Uruguay, but redeemed themselves with a 2-1 win over France in the final pool match, albeit that was still not enough to send them through to the knockout phase.

"We gave a good account of ourselves," Mosimane said.

Former Bafana Bafana midfielder Reneilwe “Yeye” Letsholonyane has showered praise on coach Pitso Mosimane and given insight into the ‘huge role’ the ...
Sport
2 years ago

South Africans should resist scapegoating then-coach Carlos Alberto Parreira for Bafana Bafana’s disappointing opening round exit as hosts of the ...
Sport
2 years ago
Next Article