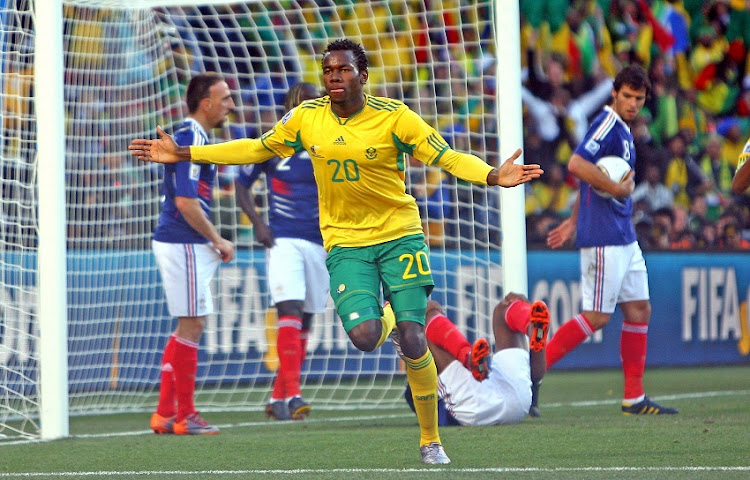 Steven Pienaar of Bafana Bafana and Florent Malouda of France in action during the 2010 Fifa World Cup match between Bafana Bafana and France at the Free State Stadium in Bloemfontein, South Africa on 22 June 2010. Even though Bafana Bafana won the match 2-1, they did not make it through to the second round of this tournament.
Image: Gallo Images/Foto24/Ian Carbutt

Bongani Khumalo says once Bafana Bafana survived several scares in a nervy opening half in the 2010 World Cup opening game against Mexico‚ they came into the change room and coach Carlos Alberto Parreira said: “Now we can start our World Cup – now we start to play.”

SuperSport United defender Khumalo (33)‚ who earned a contract at Tottenham Hotspur after three strong performances at the 2010 Fifa World Cup‚ said it was a matter of inches that eventually resulted in Bafana becoming the first host national team to not progress past the first round of a World Cup.

Exactly 10 years ago‚ on June 11‚ 2010‚ Siphiwe Tshabalala put Bafana ahead with a 55th-minute scorcher‚ Rafael Marquez equalised in the 79th‚ and Katlego Mphela rounded goalkeeper Oscar Perez in injury time but struck the post with an effort that‚ had it gone in‚ would ultimately have put SA through Group A.

“Yeah‚ you talk about inches – I saw replays not too long ago of that chance and I thought‚ ‘Wow‚ we were really in this game’‚” Khumalo told SowetanLIVE.

“We came in at half time and that’s the first thing Parreira said‚ was‚ ‘OK‚ the nerves are gone‚ just go and play now. Now we can start our World Cup – now we start to play’.

“He didn’t walk in and be like‚ ‘Why are you nervous‚ why are you like this?’ It was like‚ ‘It’s expected‚ it’s understandable‚ it’s done‚ we’re still in the game‚ let’s just carry on from there and really impose our game now’.”

Khumalo said it was in the change room before the 4pm kickoff game that Friday afternoon where seeing the global superstars attending the game on the TV monitors brought home the magnitude of the occasion.

“On the day waking up‚ there’s nothing like it‚” the defender said.

“We had played a number of friendlies before the World Cup. And those were great. There’s so much attention‚ so much expectation.

“The pressure is the same‚ but surely on the morning of the opening match of a World Cup – I mean‚ I’m so blessed to have been a part of that. And you know for a fact that everyone around the world is watching the first game.

“The morning I hardly remember. I just remember waking up and being‚ ‘Oh‚ I actually slept’.

“Certainly the bus ride‚ I think that’s when the butterflies started‚ when you start seeing fans on the street.

“I actually picked up the phone to call one of my mates‚ just to try and have the most average‚ normal conversation and try and generalise the situation.

“When you get to the change rooms its different. There are TV monitors everywhere. They had the opening ceremony while we entered the stadium.

“And if you catch a glimpse of the TV‚ you see world stars‚ your favourite music artist‚ world leaders. And that just showed the significance of the moment. You put on your boots and just focus on the game.

“The tunnel is always a special place‚ a place of no return. You can’t go back for a wee‚ or be ‘I didn’t drink enough water’.

“And then you’re just waiting for the game to begin.”

A 3-0 defeat against eventual semifinalists Uruguay in Pretoria and 2-1 win against France in Bloemfontein saw SA exit in the opening round by the narrowest of margins‚ level on points but with an inferior goal difference to Mexico.