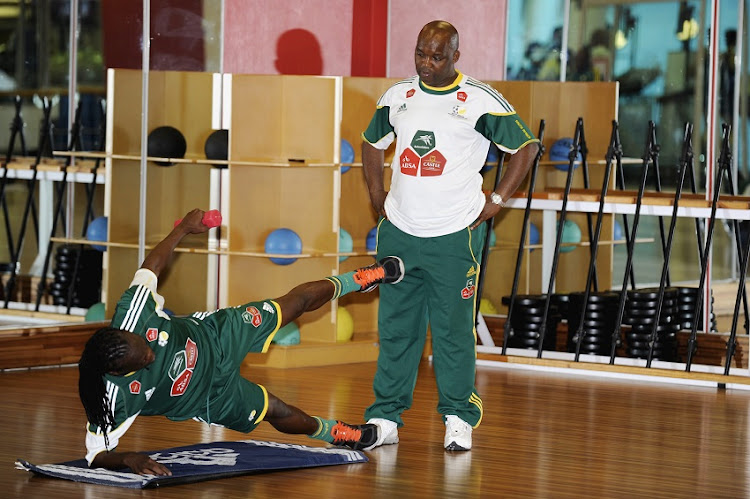 Former Bafana Bafana midfielder Reneilwe “Yeye” Letsholonyane has showered praise on coach Pitso Mosimane and given insight into the ‘huge role’ the irrepressible Mamelodi Sundowns mentor played in the national team during the 2010 World Cup.

Thursday marks exactly a decade since the start of the global showpiece at FNB Stadium and Letsholonyane said Mosimane was a reliable link between the players and coach Carlos Alberto Parreira.

The Sundowns coach has risen to become one of the most revered figures in world football in the last decade and was Parreira's assistant together with Jairo Leal during the World Cup.

“Coach Pitso played a very huge role as the link between the players and coach Parreira‚” said Letsholonyane.

The veteran midfielder played in the opening two matches against Mexico and Uruguay and was an unused substitute in the last match against France.

Bafana drew 1-1 with Mexico in the tournament opening match at FNB Stadium‚ then fell 3-0 to Uruguay at Loftus in theit second outing and finally bowed out of the event in the group stages despite a 2-1 win over France at the Free State Stadium.

Letsholonyane said Mosimane was extremely important as Brazilian Parreira was not fluent in English.

“You must remember that Parreira was not fluent in English and sometimes he would want to say something but we didn’t completely understand‚" he said.

"So it was coach Pitso who would step in on the field or during one-on-one sessions to explain to us (as players) in simple terms.

"In my view‚ that was very important because there were no grey areas‚ which could have led to confusion. That synergy made things easy for players to grasp things and understand what expected from us from coach Parreira.

“Obviously all the players respected coach Parreira but coach Pitso understood us very well as a South African who is from Kasi (township)‚ and he had already played and coached in SA and also played overseas.

"We related to him (Mosimane) in important things like language‚ the lifestyle and he knew us very well as individuals.

"That helped coach Parreira to fully understand our mentality and because of that he managed to make us better players. The whole system worked very well and one of the most important people was coach Pitso.”

Letsholonyane added that what helped was also the fact that Parreira didn’t want to change the South African style of playing where players likes to express themselves.

“He is a very good coach who knows football very well. Tactically and technically he is up there with the best in the world and you could see his experience at training.

"He didn’t really change the South African style of play but he focused on improving how we play so that we can become better players.”

Letsholoyane revealed that he felt the pressure building as the tournament drew closer in 2010.

“Definitely‚ I felt the pressure and huge responsibility on my shoulders as an individual. As the opening game drew closer‚ I realized that there was no place to hide and we just have to go out there and represent our country.

"Pressure was heavy but there was no way out of it‚ the World Cup was here and South Africans wanted to be represented in the best possible way.

“On the morning of the opening game it was breakfast and you had a short window to relax in the room. Then there was another team meeting followed by lunch and then we went to the stadium.

"It was when I realised that the day had arrived and there was no turning back. What we have been preparing for the past few months had arrived‚ I just had to focus on what was in front of me.