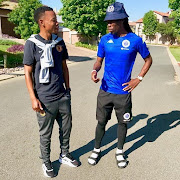 There is another Letsholonyane at Kaizer Chiefs‚ and Tshidiso Letsholonyane‚ the brother of former Amakhosi star Reneilwe‚ has revealed how injuries derailed a budding playing career and resulted in him toaking a coaching path.

Chiefs’ under-17 coach also revealed how the Covid-19 pandemic has affected his academic plans negatively.

The 28-year-old Soweto-born ex-footballer was scheduled to fly to Ireland to add another level of coaching to his Uefa qualification‚ but those plans have been put on hold.

The brother of Amakhosi’s 2010 World Cup star Reneilwe “Yeye” Letsholonyane‚ who last played for Highlands Park in the 2019-20 season‚ revealed that his dream to become a football star was hampered by injuries.

“I felt I no longer had the desire to play football and that’s when I decided to take a different route‚” he said.

The younger Letsholonyane sibling did not let injury setbacks derail his will to be involved in football as he quickly ventured into coaching.

“I decided to go to school and do a short course to help kickstart any role in a football environment‚” he said.

“I did a sports coaching science course with [Randburg-based] Trifocus Fitness Academy. As part of the course‚ I was expected to do practicals and shadowing in a football environment.

“I am glad Kaizer Chiefs offered me the opportunity to do my practical in the development academy.”

As a young player‚ in 2011 Amakhosi had offered Letsholonyane a three-year contract before he was loaned out.

“I was loaned to a National First Division side Dynamos FC‚” he recalled.

“I was there for a season but didn’t get that much game time. It was a disappointing experience for me but I never looked back. I continued to focus on the future.”

Apart from football‚ Letsholonyane is passionate about issues that affect the youth and engages his team and his peers regularly.

“I have so many coaches I look up to. I’m still young and I am planning to acquire as many qualifications as possible‚” Letsholonyane said.

“I plan to learn as much as I can and grow not only as a coach but also as a person that the kids look up to.”