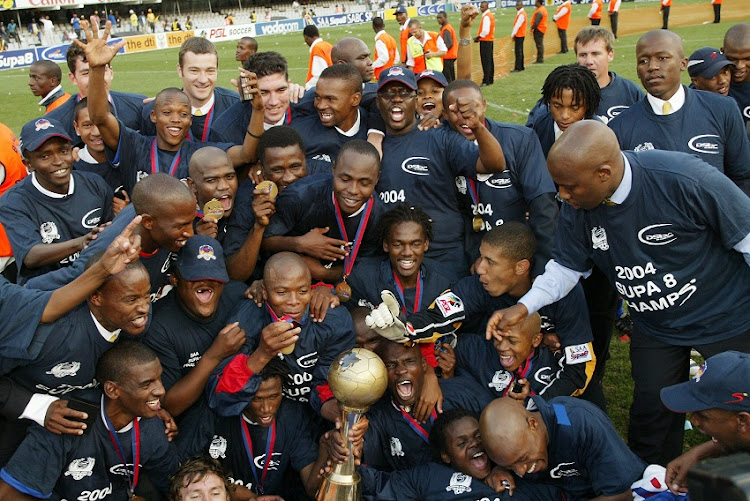 It was the beginning of a relentless pursuit of success for Mosimane who has since gone on to win 11 trophies‚ including the 2016 Caf Champions League with current club Mamelodi Sundowns‚ making him one of the most successful coaches on the continent.

In his trophy cabinet‚ “Jingles” proudly boasts the SAA Supa8 and Absa Cup he won with SuperSport United plus the four Premiership titles‚ two Telkom Knockouts‚ one Nedbank Cup‚ the Champions League and the Caf Super Cup he won with Sundowns.

SowetanLIVE went through the files to find out how Mosimane’s SuperSport lined up against Chiefs 16 years ago and what has happened to those players since?

He produced some good saves during that match‚ especially in the second half as Chiefs launched a late fightback to force the equaliser. He is currently Mosimane’s goalkeeper-coach at Sundowns.

“Pa”‚ was an integral part of this team and Mosimane played him at central defence in the absence of Kaitano Tembo who got injured in the semifinal win over Wits. After retiring in 2018‚ he went to study at Wits University and he holds a political science and social studies degree.

He led the team on that afternoon and partnered Gaxa in the heart of the defence. When he retired‚ Katza coached the juniors at United for a number of years and in 2018 he took over as director of football at Grey College in Bloemfontein.

The left-back did a good job on Chiefs’ dangerous Arthur Zwane. He went on to play for Bloemfontein Celtic‚ Moroka Swallows and Black Aces and last year he was signed by Baberwa FC in the ABC Motsepe League.

He scored what turned out to be the winner from the penalty spot after 48 minutes. The right-back later retired after he played for Bidvest Wits and Thanda Royal Zulu. He is now a coach at Crawford College in Pretoria.

“Fire” was the water carrier of this team and he was up against Tinashe Nengomasha in what turned out to be a spicy midfield battle. After football‚ he was an analyst on SABC and has business interests in the Vaal.

He was Khoabane’s partner in crime as the enforcers in the midfield where they formed a solid partnership. He went on to play for Platinum Stars and Black Aces and after retiring he went into coaching. His last high profile coaching job was at Baroka FC where he was an assistant to Jacob Sakala.

Mosimane deployed him in the midfield due to the absence of Cavann Sibeko who was saw red in the semifinal win over Wits. Zwane went into coaching after his playing days and a few years ago he was the head coach University of Johannesburg in Varsity Cup. He currently runs his own academy.

The winger was a constant irritation for the Chiefs defence that afternoon with his pace and trickery. He retired after having played for AmaZulu and Ajax Cape Town and he is currently coaching at SuperSport Soccer Schools.

“Fire” led the attack but he was not on the score sheet as Phil Evans’s penalty proved to be enough to lift the title. Raselemane’s career was cut short when he died in 2008.

Tico-Tico was not on the score sheet but it was his goal in the semifinal win over Wits that helped United to the final. He is back home in Mozambique where he runs his own academy. He recently ran for presidency of the Mozambique FA but lost.

“Massaro”‚ who scored SA Under-23s’ goal that took them to the Sydney Olympics in 2000‚ came off the bench but could not find the back of the net. He is back home in Allanridge in the Free State where he is coaching an amateur team in the lower division.

Mosimane also introduced “Terminator” in the second half to inject speed into the attack. Mabalane went on to notably play for Orlando Pirates and Moroka Swallows before he retired and he is currently a TV pundit.

With the clock ticking down‚ Mosimane introduced the Ghanaian to tighten things up in the defence. After playing for Platinum Stars‚ Inusah returned home to Ghana where he played for a number of clubs before retiring in 2018.