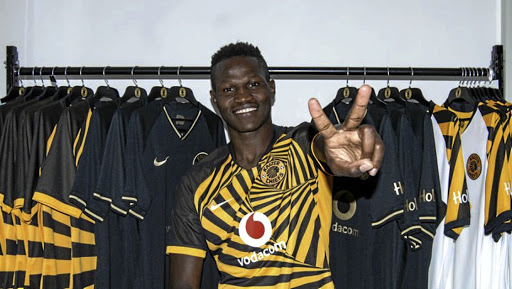 Despite a slow start to his Kaizer Chiefs career, Anthony Akumu has vowed his spell at the club won't go the same way as James Kotei and Godfrey Walusimbi.

The duo, signed amid much fanfare, departed Naturena without having made impact in the past year, and now the spotlight is on Kenyan Akumu to see if he, too, will end up in the doldrums after struggling to command a regular place in Ernst Middendorp's match-day squad.

Just before Covid-19 brought about a premature halt to the Premiership season, Akumu had made just five appearances in the black and gold of Amakhosi, three of which were as a late substitute, while in two starts, he was hauled off at halftime.

Such a modest record could raise doubt about the lanky holding midfielder's ability to cement a place, let alone fulfil expectations as a potential long-term heir to veteran Willard Katsande in the role of a commanding midfield enforcer.

But Akumu, speaking to Sowetan, said he will strive to remain at Chiefs and rekindle the form that saw the club lure him from Zesco United, of Zambia, in January this year.

"It's true that some fans back home expressed reservations about me coming here," the 27-year-old said.

"They feared I would go the same way [as Walusimbi and Kotei] and I won't settle down. But I can't get such criticism into my head. I like challenges. Players are different. [Moving to Chiefs] might not have worked for others, but I think it will work for me. I will ensure it works for me."

Ghanaian Kotei left Chiefs without making even a single official appearance last year, while Walusimbi, a left-back from Uganda, was released in January last year having played 17 matches.

But what counts to Akumu's favour is that he spent two years at Zesco, and had familiarised himself with Southern African football. He played 180 minutes over two legs for the Zambian side against Chiefs in the CAF Confederation Cup last year, scoring the opening goal at FNB Stadium as Zesco ran out 5-2 winners on aggregate.

"I didn't imagine that I would be at Chiefs today, even when I played against them at FNB. PSL, yes, I dreamt of being here because it's a nice, professional league."

Chiefs convinced him not to renew his contract with the Zambian side as it was about to end, and asked him to join in January.

"I received a call from one of the bosses. I had few other offers, but when the call came from Chiefs, I didn't even hesitate."

Akumu made his debut against Real Kings in the Nedbank Cup first round in January, coming on as a late replacement. But it was his appearance in the Soweto Derby on February 29 that left a lasting memory.

"I remember I also came in late in the derby. I loved every moment of it. the atmosphere, a stadium full to capacity, 86,000 people, I couldn't even hear my teammates. I came on after Willard got injured and the instruction was that I should shield the defenders as we were leading 1-0. We managed to achieve our goal," he recalled.

He's confident that once the league restarts, Chiefs will be able to retain their place atop the Absa Premiership.

"We must take it one game at a time. Other teams are close to us, but we have to strive to win [the league] for the badge. We must be united to achieve this goal."