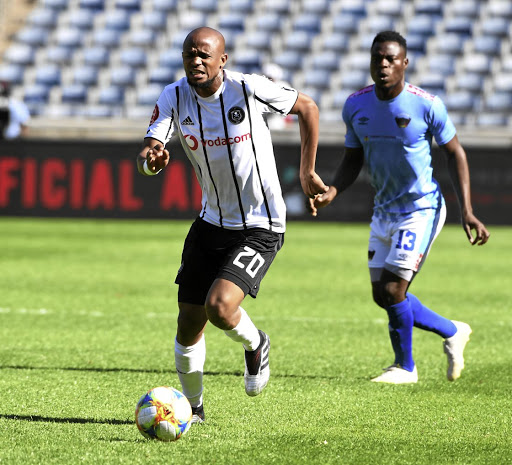 Having fallen further down in the Orlando Pirates midfield pecking order after the arrival of German coach Josef Zinnbauer, talented midfielder Xola Mlambo's time is wasted at the Buccaneers.

This is a bold sentiment of renowned mentor Dan Malesela, a man who played a pivotal role in fine-tuning Mlambo's gift early in his career.

Malesela coached the Buccaneers ace as a young boy at Mamelodi Sundowns' SAB League side in 2015.

The pair worked together again at Cape Town All Stars and at Chippa United in 2015 and 2016 respectively.

Mlambo had already made seven league appearances before Zinnbauer took over last December and since the German's arrival, the 28-year-old hasn't featured even once.

"I don't think there's a need for bouncing back or anything. I think the boy's [Mlambo's] time is being wasted," Malesela told Sowetan yesterday.

Fortune Makaringe says he is impressed at how Orlando Pirates have gone about utilising technology to keep players integrated in their home training ...
Sport
2 years ago

The unattached tactician, who left second-tier outfit TS Galaxy in February, also argued the Sea Robbers are playing Mlambo out of position.

"He needs to be understood. I think he was played at wrong positions at Pirates. Maybe it's because many people look at what a player does with his feet, but not with his brain. His game is more mental than anything," Malesela said.

"He probably would have created a lot of goals had he been played a little bit closer to the goals. You can't expect him to go and do your dirty job. The players I don't like are those said to be the 'destroyers', I don't understand what they're destroying because football is not WWE (wrestling)."

Ahead of Mlambo in the pecking order are Fortune Makaringe, Kabelo Dlamini, Ben Motshwari and Siphesihle Ndlovu, among others. Mlambo's Bucs contract is believed to be expiring at the end of next season.

Pushed to reveal which team he feels Mlambo can perfectly fit in, Malesela pointed Sundowns, adding he would also attempt to sign the Dobsonville, Soweto, lad at his next coaching job.

"I won't talk for other people, but probably at Sundowns he'd fit in like a glove. If he's available I will sign him if I get a team as well."