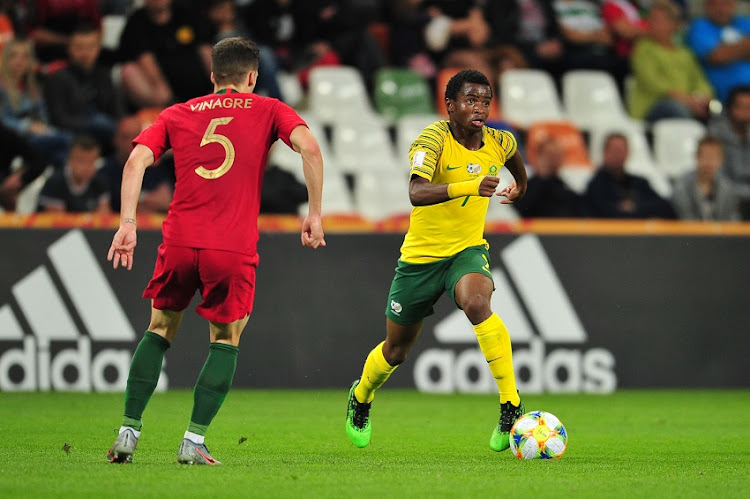 Promise Lebo Mkhuma. Save the name and remember it as Mamelodi Sundowns coach Pitso Mosimane has tipped Mkhuma to become the next big thing to emerge from the club's conveyor belt of talent.

Save the name and remember it as Mamelodi Sundowns coach Pitso Mosimane has tipped Mkhuma to become the next big thing to emerge from the club's conveyor belt of talent.

Mosimane believes the 20-year-old has the potential to follow in the footsteps of Percy Tau‚ Keagan Dolly and Bongani Zungu who all brazed a trail at Sundowns before taking their talents to Europe.

The future superstar turned 20 on Sunday May 24 and was this season promoted to the Sundowns senior side after impressing in the MDC team for a couple of season.

“He’s going to show us something.

But Mosimane cautioned against throwing the young player into the deep end‚ saying a loan spell to one of the Premier Soccer League teams next season may help the Tshwane-born Mkhuma to gain experience before returning to Sundowns.

“I think in my opinion I need to loan him out. He must go play and he must follow what Percy and Keagan followed‚” said Mosimane.

“He must follow what (Motjeka) Madisha followed. Madisha went on loan to Highlands Park and all that.

“Even Dennis Onyango went to (Bidvest) Wits. I can go on and on.”

Mosimane said the loan spells tend to have an adverse effect on the players if it is not done in a proper way with the player concerned.

“It mustn’t be a matter of saying hamba asisakufuni manje (go we don’t want you for now). Then it will backfire.

“If it’s in a good spirit and you phone the player and check ‘hey ngibonile ukuthi udlala kahle (hey I saw that you played so well) but heyi ndoda (hey man) what happened‚ you didn’t put a lot of effort’.

“Then he knows that he has to come back and he also says ‘I didn’t fail at Sundowns‚ I have never been given the opportunity’.

“So those are the other things that you have to make sure you tick with these players. So with Promise we have to leave him to go on loan and go play.”

Mosimane penned a new four-year contract extension on top of seven-and-half years he has already spent at Sundowns on Thursday.

He is now arguably amongst the highest paid coaches on the continent after club boss Patrice Motsepe revealed that they went out of their way to pay him what he deserves after bringing nine trophies to Chloorkop‚ including the Caf Champions League in 2016.