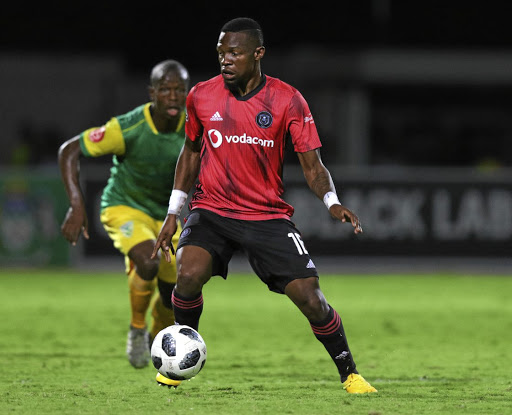 Agent Jazzman Mahlakgane has explained that his client, Tshegofatso Mabasa, has no intentions of leaving Orlando Pirates as the striker is eager to reclaim his place in the team.

Mabasa, who joined the Buccaneers at the start of the season, was an instant hit and was the go-to man for goals for previous interim coach Rulani Mokwena.

The 23-year-old bagged six goals in the first half of the season, but later lost his place to Gabadinho Mhango when Jozef Zinnbauer arrived in December.

"When he was doing very well I told him that he must remember that other strikers in the team will be motivated to get into the team," Mahlakgane told Sowetan.

"I told him to be ready for his next chance. I know how motivated he was to get back into the starting team.

Frank ‘Gabadinho’ Mhango’s quest to finish the season as the top scorer is not a priority at Orlando Pirates, said coach Joe Zinnbauer.
Sport
1 year ago

"After losing their place to Mhango another player would have maybe had their head down, but Tshego was motivated and looking forward to competing for his place.

"I am glad it didn't kill his spirit. They have both been scoring for the team this season, so it is good for the team that they have been both contributing goals when they play."

Since becoming the main striker, Mhango has gone on to become the top scorer in the league with 14 goals to his name.

Mahlangane said fans should give Mabasa credit for his solid first season, considering that he came from the smaller Bloemfontein Celtic.

"When you move from Celtic to a big club like Pirates usually you start on the bench and then work your way up.

"If you look at it from this perspective then you'll see that he has done well because he has managed to be on the team sheet which says he remains an important member of the squad."