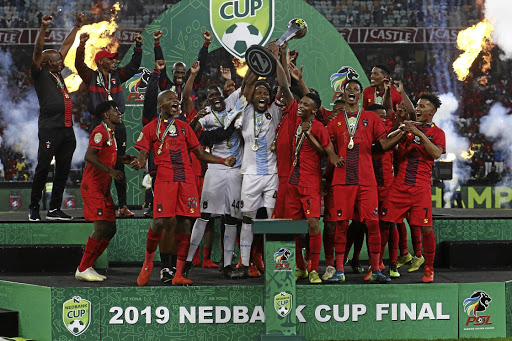 Today marks a year since TS Galaxy's historic Nedbank Cup final triumph where the minnows handed Kaizer Chiefs their most humiliating defeat yet.

In that famous final in Durban last year, it looked as if Amakhosi would finally snap their trophy drought, but the Rockets flipped the script to secure a 1-0 win thanks to a last minute penalty from Zakhele Lepasa.

Galaxy defender Terrence Mashego said his team had the belief that they could pull off an upset over the Glamour Boys.

"People forget that we really had a good team. We had a strong team, but many people did not give us a chance," Mashego said.

"We were motivated because we were facing Chiefs. After coming back against Golden Arrows in the semis, we knew we could beat Chiefs. The game taught me that no matter how big a challenge is, as long as you are determined you can overcome."

With their victory, the GladAfrica Championship side became the first lower division side in SA to qualify for the CAF Confederation Cup.

Chiefs on the other hand, have still not ended their barren trophy run, which is now five years long.

The sleeping Soweto giants were limping to the finishing line in the Absa Premiership before games were suspended due to Covid-19 pandemic.

Much has changed at Galaxy since that win at the Moses Mabhida Stadium.

Mashego, who replaced Ludwe Mpakumpaku as team captain earlier this season, admits that the club put the bar high for itself.

"It was going to be difficult to match or better our cup victory. Our aim was to gain promotion to the Absa Premiership this season. Opponents are motivated when they play against us and always want to beat us," he said.