Shakes Mashaba’s talented Espoirs U-23s – where are they now? 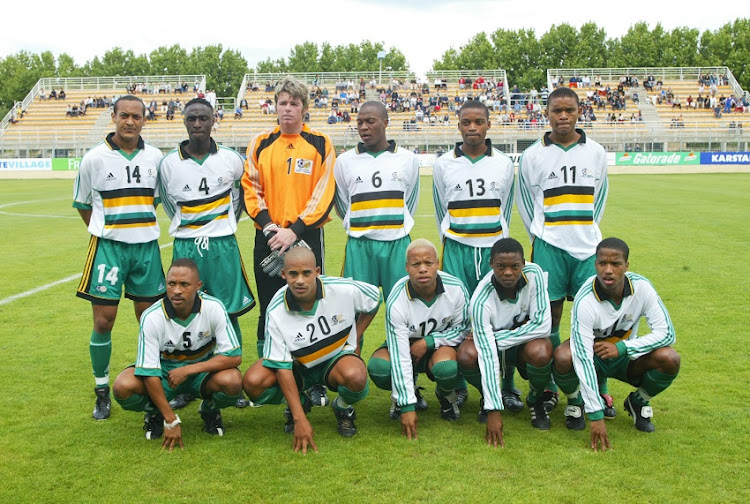 In 2002‚ coach Ephraim “Shakes” Mashaba took a talented Under-23 team to the famed Espoirs de Toulon tournament in France.

SA finished sixth in the 10-team tournament‚ which is widely regarded as the unofficial European Youth Championships‚ following defeats to Japan and Italy‚ a draw with Germany and a win over Republic of Ireland.

Some of the players from that tournament who became household names are Adriano‚ Dani Alves‚ Maxwell of Brazil‚ Federico Balzaretti‚ Andrea Barzagli and Christian Maggio of Italy and Thomas Hitzlsperger of Germany.

Mashaba had a team of highly talented players but most of them never fulfilled their full potential.

SowetanLIVE did some investigating on what they are up to now?

He was the preferred goalkeeper and went on to a journeyman career with SuperSport United‚ Orlando Pirates‚ Black Leopards and teams in the First Division. He never played for Bafana Bafana and his whereabouts are not known.

Another keeper in the team‚ he played for Hellenic‚ Santos‚ Vasco da Gama and he retired before earning a Bafana cap. He is a fitness and Commando Boot Camp trainer.

One of the best players Mashaba’s group‚ ‘Ninja’ was with the Ajax Amsterdam juniors at that time but he also never graduated to Bafana. He was affected by off-field problems and played for Moroka Swallows‚ Mamelodi Sundowns and FC AK when he returned home. He lives in Gauteng.

A dependable left-sided defender who spent his entire successful 13-year career with Ajax Cape Town‚ and he represented Bafana. He is currently a coach at Point Loma Nazarene University in San Diego‚ US.

He was one of the central defenders in the team and played for Hellenic‚ Vasco da Gama‚ Bidvest Wits‚ Moroka Swallows and Mpumalanga Black Aces. He never played for Bafana and his whereabouts are not known.

One of the leaders in the team. He left Santos in Cape Town to have a successful career in Europe and also played for Bafana. In Greece he played for Panathinaikos and Aris Thessaloniki and in Cyprus he played for Apollon Limassol while he turned out for Racing Santander and Recreativo Huelva in Spain. He is coaching in the amateur leagues in Cape Town.

A product of the once flourishing Transnet School of Excellence‚ ‘Domza’ was a key defender of this team and he played for Ajax Cape Town‚ Kaizer Chiefs and Bloemfontein Celtic. He never played for Bafana Bafana and last year he had a coaching stint with Cape Umoya.

He was a promising left-sided defender who turned out for Maritzburg United‚ Mamelodi Sundowns‚ Bloemfontein Celtic‚ Thanda Royal Zulu and Bafana. Last year he had a coaching stint with Potchefstroom amateur side Tlokwe United.

He came through the junior ranks at Santos before joining Kaizer Chiefs but he failed to command a regular place at Naturena and never played for Bafana. His whereabouts are not known.

One of the best attacking players in the team. ‘Duku Duku’ enjoyed a good career with Orlando Pirates‚ Moroka Swallows and Mpumalanga Black Aces but strangely he did not play too many matches for Bafana. He runs a football development programme in the West Rand and Soweto.

A vital holding midfielder for the team‚ he played for Bush Bucks‚ Manning Rangers‚ IFK Norrköping in Sweden‚ Maritzburg United and Vasco da Gama before he retired. He played for Bafana Bafana and last year he was the coach of Eastern Cape amateur side Sinenkani FC.

‘Tso’ went on to have productive career as captain of Orlando Pirates and he also played for Aalborg BK in Denmark‚ Mamelodi Sundowns and Black Leopards in the PSL. At some stage he was an important player for Bafana and he is currently coaching in the amateur leagues.

‘The Sensational’ flourished under the late Ted Dumitru but his career stalled due to off-field problems. He made his name at Mamelodi Sundowns and went on to play for Bloemfontein Celtic. After retirement‚ he coached an amateur team in Carletonville.

‘Sguda’ played for Maritzburg City and rose to prominence with Orlando Pirates but he never played for Bafana. He has coached a number of teams in the lower leagues in KwaZulu-Natal.

A useful holding midfielder‚ Kometsi came through the ranks at Hellenic and went on to play for Moroka Swallows‚ Cetinkaya TSK in Cyprus‚ King Fung FC in Hong Kong and University of Pretoria. He also played for Bafana and his whereabouts are not known.

Blessed with a sweet left foot‚ ‘Shoes’ was one of the best players in this U-23 team but his career never took off. He made his name at Golden Arrows but never played for Bafana and his whereabouts are not known.

‘Skapie’ had the talent to become a star but his career was hampered by off-field problems. He made his name at Kaizer Chiefs and later played for AmaZulu and a host of other teams in the lower division and he never played for Bafana. He lives in Daveyton.

‘Slow Poison’ had the makings of a genuine super striker in the mould of Benni McCarthy. His highly promising career was cut short when he died in a car accident in 2003 while on the books of Orlando Pirates and establishing himself at Bafana.

He was already in the books of Excelsior Mouscron in Belgium‚ where he joined after impressing at Hellenic and FC Fortune. He also played for Ajax Cape Town‚ Bröndby IF in Denmark and Western Province United and never played for Bafana. He is back in Cape Town.

He made his name at Kaizer Chiefs where he came through the youth structures and went on to play for Black Leopards‚ Golden Arrows and Chippa United in the PSL. He never played for Bafana and his whereabouts are not known.