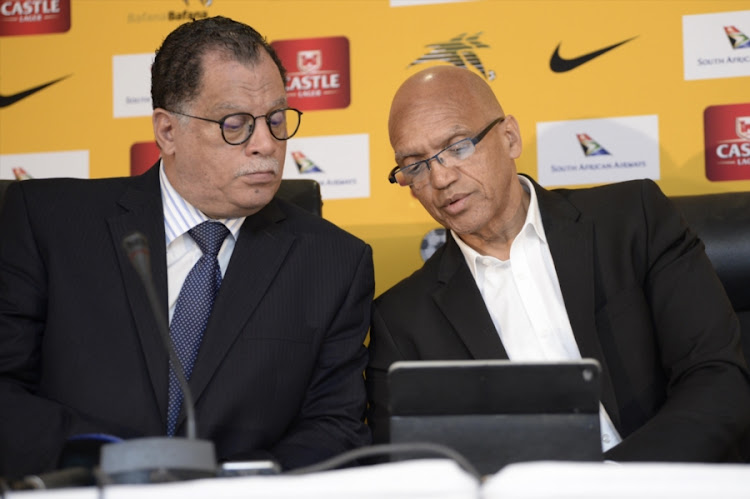 The SA Football Association (Safa) has said that a second report to emerge from a former chief executive‚ this time Dennis Mumble‚ and to make startling allegations against president Danny Jordaan‚ is an attempt to destabilise the association.

The contents of a 71-page‚ 30‚000-word report‚ which SowetanLIVE is in possession of‚ allegedly addressed by former CEO Mumble to the Safa national executive committee (NEC)‚ claims gross abuses of the office by Jordaan and that under the president “Safa is reversing all the democratic gains it has made over the past two decades”.

The report was sent to Safa’s NEC.

This is the second damning report to emerge making accusations of abuse of office and processes by Jordaan in the past fortnight‚ following one allegedly authored by former acting CEO Gay Mokoena.

Safa released a statement on Saturday responding to the report allegedly authored by Mumble‚ who could not be reached for comment.

Mumble served as CEO from Jordaan’s first election as president in 2013 to November 2018‚ when his contract was not renewed.

Safa’s statement read: “The second leaked letter‚ and SAFA is informed that a third letter is on the way‚ is an attempt to create an atmosphere of instability in the Association.

“The ultimate aim of these individuals is to create the impression that there is need for an investigation in the organisation.”

Mumble wrote in his marathon‚ minutely-detailed report‚ the contents of which are impossible to condense here‚ that Jordaan has abandoned the principles of the 1996 Pickard Commission. The commission was appointed by State President Nelson Mandela to investigate financial regularities and malpractice under then-Safa president Solomon “Stix” Morewa.

Mumble wrote that “Jordaan‚ when CEO of Safa in the late 1990s and early 2000s‚ became the most enthusiastic supporter of the Pickard Commission’s recommendations”.

Mumble continued: “However … Dr Jordaan has made an about-turn on the actual implementation of large parts of the recommendations that he championed … .”

“ … Coupled with an abusive‚ intimidating‚ intolerant personality and a propensity of a President who delights in belittling people in public‚ the Association is on a road to a divided state that could prove difficult to repair.”

Mumble alleged “Abuse of Constitutional Processes”‚ and wrote that the‚ “‘tyranny of the majority’ is quite evident in the manner in which the Association’s business has been conducted in recent years”.

He alleged that disciplinary measures have been abused to settle political scores‚ citing the example of Mandla Mazibuko‚ the president of the SA Schools Football Association (Sasfa)‚ who contested the Safa presidency against Jordaan in 2013.

Mumble states: “Dr Jordaan‚ with most of his followers‚ then actively undertook to isolate Mr Mazibuko from SAFA structures.” He alleges the Safa Congress decision to “remove SASFA’s oversight of school football in the country” was part of this effort.

On Safa’s bitterly confrontational relationship with the National Soccer League (NSL)‚ Mumble alleges: “Dr Jordaan has for years championed the notion that the Association should never again be dominated by the League and has spearheaded many efforts to prevent it. For instance‚ he was the architect of two provisions in the SAFA Statutes that prohibits the Chairman of the League from becoming the President of the Association.

“Whilst Dr Jordaan has used the obvious reference to the past difficulties of League leaders [and cults of personality] … it is common cause that much of the leadership of SAFA has been convinced that‚ by default‚ SAFA’s #1 enemy is the National Soccer League.”

Mumble alleged that despite a report he drafted as part of Special Committee on Relations Between Safa and the NSL‚ “from personal experience‚ Dr Jordaan has continued to warn SAFA’s Members of the innate demon that is the NSL … .”

Mumble accused Safa and Jordaan of “Circumventing Due Process” in the 2018 Safa elections‚ and “Manipulation of the 2018 Election”.

He alleges vice-presidents Lucas Nhlapo and Elvis Shishana expressed they “were not pleased with his explanation” of a trip by Jordaan to New York in 2017.

He writes: “It was not long after this meeting that he told me of his fear that his VPs were plotting against him and of his plans to surprise them with an early election to prevent them from gaining traction among the Members of the Association.”

“I was therefore not surprised when a proposal came from SAFA-Umkhanyakude in KwaZulu-Natal calling for early elections. This motion was submitted 3 days after the constitutionally determined deadline.

“However‚ the late submission was subsequently condoned by Congress‚ in accordance with Article 27.6 of the SAFA Statutes. Congress also approved the motion to change the election date.

“This is another example of the abuse of Presidential power.”

Other allegations by Mumble included preventing collection of a “2013 AFCON [Africa Cup of Nations] Debt from Nelson Mandela Bay Municipality”‚ “Incorrect Reporting for the 2017-2018 financial year” and “Payment of Phantom Staff”.

Mumble‚ on “The SAFA National Technical Centre (NTC)/Fun Valley Debacle”‚ alleged: “Whilst it was a good idea at the time‚ it has become abundantly clear that this investment will not yield the required results.”

On the “The Jennifer Ferguson Rape Allegations”‚ where former African National Congress MP Ferguson laid a rape charge against Jordaan in March 2018‚ Mumble alleges that the president initially committed‚ due to concerns raised by sponsors “to step aside to deal with his personal challenges”‚ but later reversed that decision.

Mumble alleges Jordaan‚ soon after his election in 2013‚ began a “Gradual Imposition of an Executive Presidency”‚ and to override and interfere with the work of the CEO.

In response to Mumble’s report‚ Safa sent out a 1‚100-word rebuttal on Saturday.

Safa responded that: “Mr Dennis Mumble makes contradictory statements in respect to events during and after his tenure as SAFA CEO and former CEO.

“He accuses SAFA of various violations as former CEO‚ but praises SAFA in his reports (both financial and activity) placed before the NEC and the General members in the Congress while in office. These allegations are denied.

The statement continued: “The idea that SAFA is collapsing is a blatant lie”. It stated that‚ “SAFA is enjoying its most successful period”‚ listing the successes of the various junior and senior national teams in reaching international tournaments under Jordaan’s tenure.

Responding to the allegations on the NTC‚ Safa stated: “The purchase of Fun Valley was unanimously approved by the SAFA NEC and the Legacy Trust who went to see the establishment before it was purchased.”