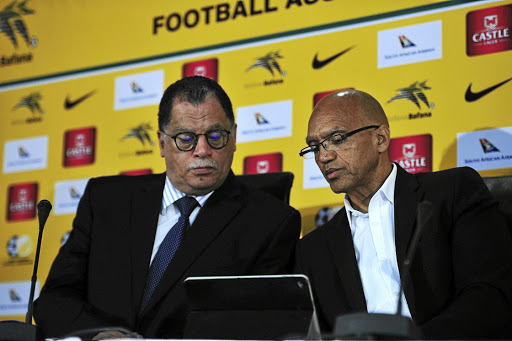 In a five-page document distributed to the Safa NEC at the weekend, Mumble makes it clear he didn't leave only due to the fact he had reached mandatory retirement age of 60, a line peddled by Safa numerously since he left late last year to be replaced by Gay Mokoena.

Mokoena also departed the acting CEO position last month, penning a lengthy document which accused Safa president Danny Jordaan of corporate governance violations, allegations which were first made by Mumble in his own confidential report just before he left office.

In his letter dated Sunday May 10, Mumble repeats some of the claims made by him and Mokoena, accusing Jordaan of assuming the role of "executive president" at Safa House.

"It is not pleasing to witness the manner in which the circumstances of my departure has been misrepresented in the public domain by representatives of the association, led by the president [Jordaan]," Mumble wrote.

The SA Football Association (Safa) will wait for French-based Bongani Zungu to get back to South Africa before “dealing with” the player’s comments ...
Sport
2 years ago

"I notified the Safa council on 8 October 2016 that my contract was coming to an end within 19 months from the date of that meeting. The notice was clear that I had no expectation of a renewal of my contract and invited the council to commence a succession planning process or to indicate whether it sought to renew my contract."

He added no follow-ups were done in this regard as the "Safa presidency" repeatedly avoided finalising the matter, up until he took accumulated leave in September 2018. He was then told, ironically by Mokoena, that he would not be reappointed as CEO in February last year.

Mumble did not spare the Safa NEC from criticism, accusing it of failing to ask for his "exit report" and of failing to raise his concerns about Jordaan in subsequent meetings.

But he reserved his harshest criticism for Jordaan.

"I trust that you will objectively examine my submission as I outline in some detail how my tenure was beset with difficulties occasioned by a president who would stop at nothing to act as executive president and violate almost every principle of good governance."

Safa spokesperson Dominic Chimhavi could not be reached for comment yesterday, despite repeated calls.