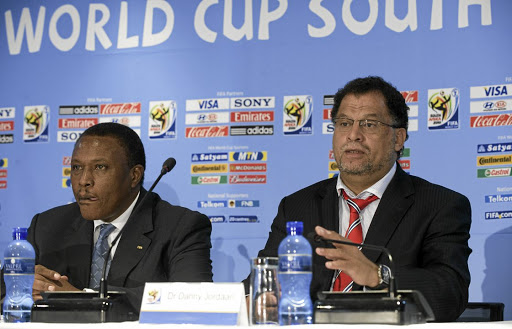 PSL chairman Irvin Khoza and Safa president Danny Jordaan are set to hold talks over the future of this season.
Image: Martin Rhodes

The South African Football Association (Safa) and Premier Soccer League (PSL) have formed a joint task team to investigate “the possibility of when it is ideal to start the NSL matches”.

Mother body Safa and its professional wing‚ the National Soccer League (NSL) – which operates under trading name of the PSL – met through their joint liaison committee (JLC) on Tuesday.

The bodies met for the first time since the national lockdown began on March 27 – and since the PSL suspended all matches on March 16 – in response to the outbreak of coronavirus outbreak in South Africa.

Safa president Danny Jordaan had said the aim of the JLC meeting was to find a single position to take as a recommendation to the government on the conditions and timing of a potential return to play of professional football‚ as had been requested from the association and the PSL by Sports Minister Nathi Mthethwa.

Safa said in a statement: “The Joint Liaison Committee (JLC)‚ made up of representatives of the South African Football Association (SAFA) and its Special Member‚ the National Soccer League (NSL)‚ met on Tuesday‚ 12 May 2020 at SAFA House to look at the possibility of when it is ideal to start the NSL matches.

“The proposals had to deal mostly with health issues and when it is safe resume the games.”

The statement continued that: “After the deliberations‚ the committee resolved to:

“The task team has been given a maximum of 14 days to complete the document and report back to the Joint Liaison Committee.”

Often at-odds Safa and the PSL had appeared to be pulling in opposing directions on their views of a return to football.

The government regulations on the phased exit from the national lockdown indicate that professional sport would only return at level one (currently SA is in level four) – a position publicly supported by Safa.

The PSL‚ anxious to avoid a financial catastrophe and to complete the 2019-20 season‚ had been investigating the possibilities of returning at an earlier level.