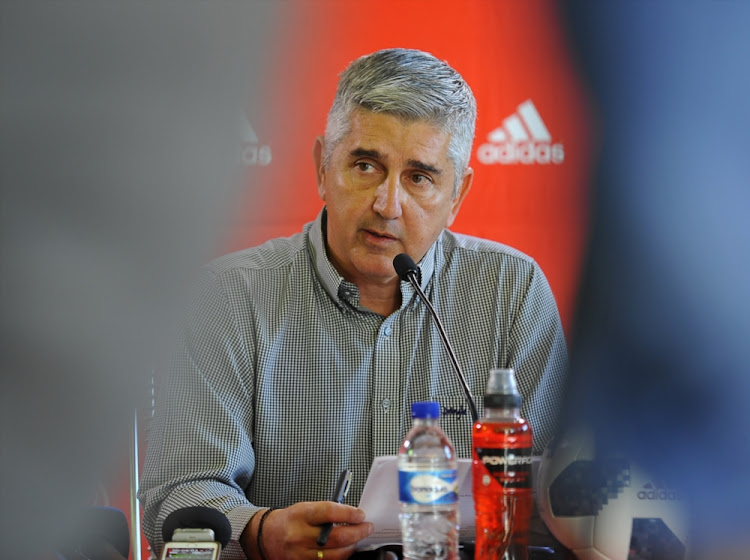 Ajax Cape Town boss Ari Efstathiou has admitted that an already rocky relationship with Ajax Amsterdam was made more so over an affair involving the suspension of Hans Vonk‚ but said any indication from the mother club of a discontinuation of the partnership has been derailed by the coronavirus.

Esfstathiou admitted an already complicated relationship‚ amidst reports emanating from the Netherlands of Ajax Amsterdam considering an end to their 21-year 51 percent ownership‚ has perhaps never been so fraught.

He said the suspension of the GladAfrica Championship’s leading team of former Bafana Bafana goalkeeper Hans Vonk as keeper-coach in January‚ and resignation in sympathy of Dutch head coach Andries Ulderink‚ has strained the partnership.

“The relationship with Amsterdam has always been not the easiest one. Because the focus of both shareholders – local and overseas – have been not aligned 100 percent for 20 years‚” Efstathiou told an online press conference of the South African Football Journalists Association (Safja).

“Their main focus has always been to find players in South Africa at‚ let’s call it‚ a good price.

“ ... The local shareholders also need to be competitive on the field‚ we need to win‚ and we need to make a profit.

“ ... The Amsterdam management also changes every three or four years. So you get a new board that has an opinion and then one that aligns with us‚ and one that doesn’t.

“This one was quite aligned with us on going forward. And that’s why after five or six years we managed to get Lambda [Ajax’s new academy launched in 2018] off the ground.

“But I think since Hans Vonk came in the relationship became a bit rocky. I think Hans had a different idea of what he wanted to do – and [it was] a little bit selfish on his side.

“And I think definitely when the whole situation with Andries came up‚ and with Hans being suspended for insubordination pending investigation‚ it [the relationship] got a bit rockier.

“They [Amsterdam] were insisting that I should not take the course that I did. And I was insisting that the same thing I would do for a South African employee I had to do for a Dutch employee.

“I still insisted I needed to do the full investigation – they didn’t want to wait. And that’s when Andries basically said to me that unless we lift the suspension of Hans he would resign.

“I wasn’t prepared to accept that‚ and I accepted his resignation‚ and that didn’t go well with him. But frankly I didn’t fire him – he resigned.

“And Hans Vonk followed because he didn’t want to hear the results of the investigation.

“And I think that hasn’t gone down well with Amsterdam‚ so it is a bit of a problem.

“But‚ you know‚ the bottom line is we’re a South African brand with a Dutch name. And we need to do whatever we need to do.

“Our focus is our academy‚ our focus is putting kids through school. And frankly whether we have the Ajax name or we don’t it still carries on.”

There have been reports of the relationship with Ajax Amsterdam being strained since a bitter family power struggle saw Efstathiou wrest control of Ajax Cape Town in 2013 from brother-in-law John Comitis‚ followed by the Urban Warriors’ relegation from the Premier Soccer League in 2018.