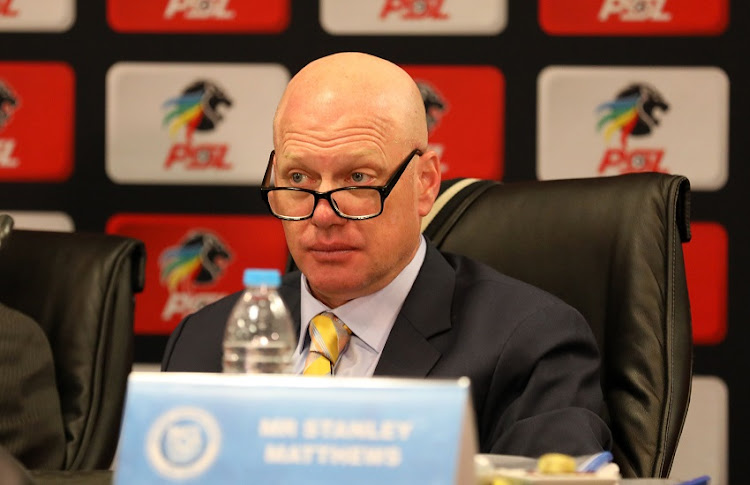 The Premier Soccer League’s (PSL) club bosses do see light at the end of the tunnel and are optimistic that the 2019-20 season can be completed‚ SuperSport United CEO Stan Matthews has said.

The PSL’s Absa Premiership and GladAfrica Championship were suspended due to the coronavirus on March 16.

Matthews‚ in a Zoom press conference with the South African Football Journalists Association (Safja)‚ was anxious to point out he could not speak as a spokesman for the PSL‚ rather only for his club.

The PSL executive committee (exco) member was asked‚ however‚ if he could in broad strokes indicate the nature of proceedings of an exco meeting on Thursday where a task team set up in late March to investigate the realities and necessities for closed-doors football reported back.

“To be fair‚ obviously I’m not a spokesman for the PSL and it’s not for me to divulge what happens in PSL exco meetings‚” Matthews said.

“But just to try and shed a bit of light on the matter‚ we did meet and we did have extensive discussions. The PSL will disclose the ultimate findings there.

“The health and regulatory task team committees did meet and we did also have briefings from various other stakeholders.”

Matthews said SuperSport sees hope for a return to football.

“From our club perspective the salient points that would come out of that process haven’t really changed‚ which is the fact that as a club we still see that there’s a hope and prospect for us to complete the season. And that we have the scope mandated by Fifa to extend the season.

“And that gives us the valuable commodity of time. And obviously time isn’t indefinite and can’t carry on forever. But we certainly see prospects that‚ if the situation allowed – from a governmental and ministry of health and sport perspective – and if we can comply with regulations‚ then we are positive that we can see out the balance of the season.”

The SuperSport boss said closed-doors football could only be possible under the right conditions‚ and in accordance within Fifa and government rules and guidance.

“If closed doors is one of the solutions that the macro-environment allows us then certainly it’s something we’d quite obviously have to consider‚” he said.

“Don’t forget we’re taking our guidelines also from the best leagues in the world‚ and by virtue of our association with the World Leagues Forum‚ which the chairman [Irvin Khoza] is a member of‚ we get daily updates.

“If you take the English Premier League‚ they are further behind us. They have 11 games to go; most of our teams have six games to go.

“So we have prospects‚ we have time and we have a unified football body of 32 clubs who want to see football played out on the field; and that we avoid at all costs going into a scenario of unknown courts‚ boardrooms and tribunals that are messy and complicated.

“ … We understand the economic implications‚ which are negative the longer this drags out. But first and foremost we understand that lives are at stake‚ and that there’s a bigger picture at play‚ and that as much as we’re suffering the whole world is suffering.”

SuperSport were in third place in the Absa Premiership‚ eight points behind leaders Kaizer Chiefs but having played two more games (24)‚ when the league was suspended.