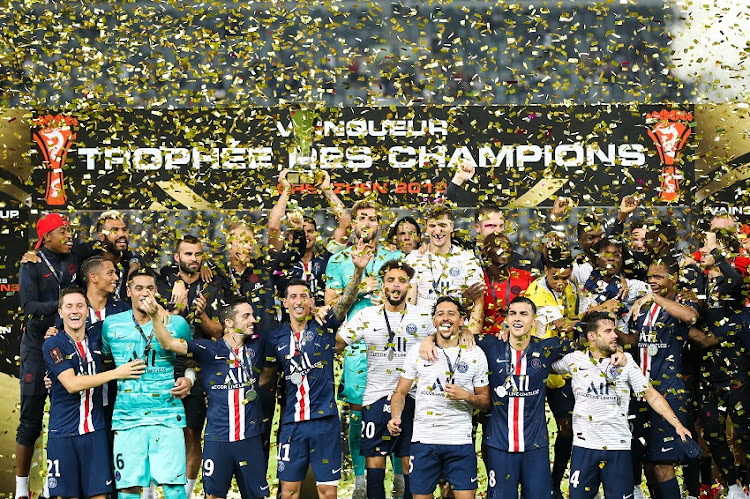 Team of Paris Saint-Germain celebrates the victory with the trophy during the 2019 Trophee des Champions between Paris saint-Germain and Stade Rennais FC at Shenzhen Uniersiade Sports Center on August 3, 2019 in Shenzhen, China.
Image: Lintao Zhang/Getty Images

The French professional league (LFP) ended its season last week with 10 games left, awarding the title to Paris St Germain and leaving Lyon outside the placings for European competition next season.

Aulas this week said his club had suffered a 'loss of opportunity' and warned he would claim 'millions of euros in damages' from unspecified bodies.

On Wednesday, the German Bundesliga said it planned to re-start on May 15, making it the first of Europe's top soccer leagues to get under way following the novel coronavirus stoppage.

"I've noted that training had resumed in almost 10 European countries. By adapting our method, we would probably have been able to complete the season," Aulas told French sports daily L'Equipe.

"We're on a wrong track but it's not too late to try and think (...) about something coherent.

"As long as there's life, there's hope. For all the people whose main argument to tell us to stop was that all the other leagues would stop, (Germany's decision) is a very important step," Aulas replied when asked until when France could change their decision.

After finishing the season in seventh place, Lyon must either win the League Cup or the Champions League to gain a European place next season.

The League Cup final against PSG has been postponed indefinitely.

The Spanish Liga, Italian Serie A and England's Premier League hope to restart, but have not yet announced dates to begin.