'The problem if you go to the top three clubs is you’re not the boss': Hunt on Chiefs‚ Pirates‚ Downs 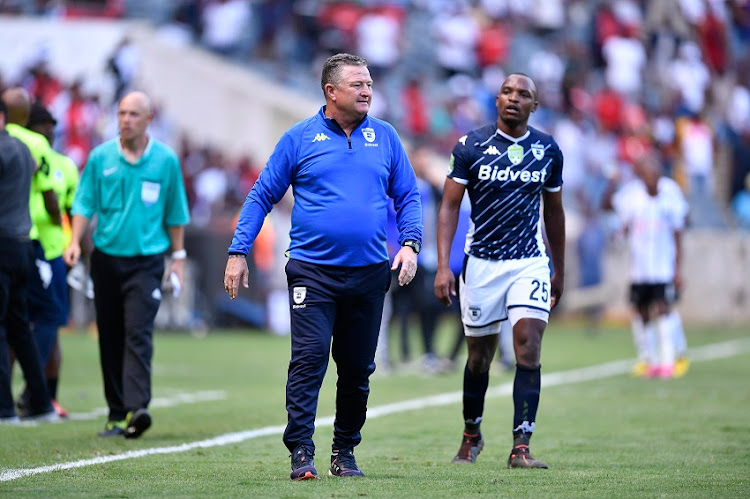 Bidvest Wits coach Gavin Hunt has said that the problem with coaching a big three team in South Africa is juggling too many bosses.

Hunt‚ given his record of four league titles and plenty more trophies at Moroka Swallows‚ SuperSport United and Wits‚ is understandably perennially linked to the Bafana Bafana job and to the big three of Kaizer Chiefs‚ Orlando Pirates and Mamelodi Sundowns when their head coaching positions open up.

He was asked in a Zoom press conference if‚ given such an opportunity at one of the Premier Soccer League giants in the next few months‚ he would consider taking such a job.

“The problem if you go to the top three clubs is you’re not the boss‚” Hunt said.

“I had a meeting with a chairman from one of the top three. And it was a great meeting. He said‚ ‘I want you to be the coach’. I said‚ ‘ja fantastic’.

“I said‚ ‘Mr Chairman there’s only one problem here – you’ve got four or five bosses here. I’m the boss’.

“And obviously it went nowhere. Nothing happened.”

The lockdown is upon us, and as is the case everywhere, local football has ground to a standstill.
Sport
2 years ago

Clive “The Dog” Barker has said that Pitso Mosimane is his favourite to become the next Bafana Bafana coach.
Sport
2 years ago

With Wits’ majority owners‚ Bidvest‚ having slashed budgets in the 2019-20 season‚ speculation of a move for Hunt from the team who he brought a first league title to in 2016-17 has grown.

Hunt‚ though‚ asked if he would consider a move from Wits in the near future‚ suggested the timing might not be right‚ although he also admitted the lure of a glamour team is a factor.

“It’s a hypothetical question. If you’re out of a job then you’d say‚ jeez‚ you would jump in at something.

But right now‚ I mean we are in a good project here [at Wits] and it’s a good club. There’s stability‚” he said.

“Yes the only thing I do miss [at this club] is the glamour‚ the razzmatazz and the supporters and that. I think that’s obviously frustrating. But that obviously is also a motivating factor.

Wits were in sixth place in the Absa Premiership‚ 10 points behind leaders Chiefs but with a game in hand‚ when the league was suspended due to the coronavirus on March 16."