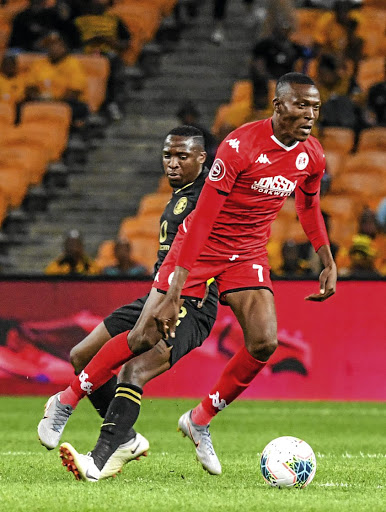 Highlands Park co-director Sinky Mnisi doesn't want to comment on Tendai Ndoro but says all players at the club must earn their money by performing. / Sydney Seshibedi/Gallo Images

Ndoro is one of the highest-paid players at the Lions of the North but has failed to justify his earnings on the field.

The Zimbabwean's salary has reportedly been cut by 20%, and with his contract expiring in June and Highlands say they might not renew it.

"The club is likely not going to renew his contract. They are not happy with him. I mean, what has he done for Highlands during his stay? Nothing," a source said.

Ndoro has only managed to make 14 appearances in all competitions this season - scoring only two goals and making one assist.

He last played on January 8 against Kaizer Chiefs in their 0-3 defeat at FNB Stadium. Asked for a comment, the 34-year-old Ndoro refused to comment and said we must ask permission from the club to do interviews.

However, Ndoro may have well confirmed on Twitter last week that his salary was cut when he said: "I don't mind if Highlands can go four months without paying my salary, as long they use that money to help on Covid-19. Stay at home, save lives," he tweeted.

Highlands co-director Sinky Mnisi didn't want to comment specifically on Ndoro but said all players who join the club must earn their money by performing. "It is not what the team can do for you, but what you can do for the team.

"Yes, we accept and understand that we've entered into a contract with players but at the same time, it is painful at the end of the month as an owner or a company that we need to pay some players full salaries, in the meantime, those players are not doing enough for the team."

Highlands Park co-director Sinky Mnisi feels professional football will collapse if it is not restarted soon.
Sport
2 years ago

As Mamelodi Sundowns and Orlando Pirates are said to be vying for the signature of Maritzburg United goalkeeper Richard Ofori, veteran Greg Etafia ...
Sport
2 years ago
Next Article