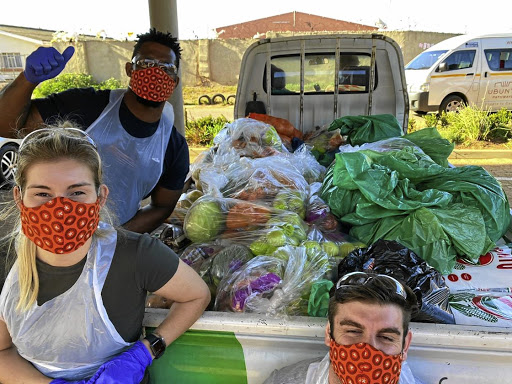 Bok captain Siya Kolisi and his wife Rachel showed kindness to communities in Limpopo and Zwide.

As the coronavirus crisis continues to hit the poor the hardest, sports personalities in the country in the past week came to lend a helping hand.

The Covid-19 crisis has created a hunger crisis with citizens who eke out a living as informal traders now with no income.

Some well-known names in sports have taken it upon themselves to donate food parcels and household essentials to those in need during these desperate times.

"We wanted to help and asked fellow South Africans to help out and they came on board. Hopefully others can jump on board and do for others as well," Kolisi said.

"Water and food are things that everyone has a right to. If I had done nothing I would have embarrassed those who raised me because I know the struggle."

Girly Nyaloku and her grandchildren were looking forward to eating a decent meal after they have had to survive on porridge with no sugar.
News
2 years ago

"I think it's an obligation for anyone in a privileged position to help those in need in these trying times," Khumalo said.

"I have been able to donate my full salary for this cause and it is the least I could do. The aim is to reach out to as many as 300 families with some essentials."

Baroka FC staff members have also been on a drive to donate food items to various communities in Limpopo. Club owner Khurishi Mphahlele said: "In these difficult times, it is upon us to help the poor where we can. As Baroka we came together with our sponsor Global Oil to give to those in dire need."

Award-winning maskandi singer Thokozani Langa has proved to be a true role model when he donated food parcels to the needy people in his village of ...
Entertainment
2 years ago
Next Article