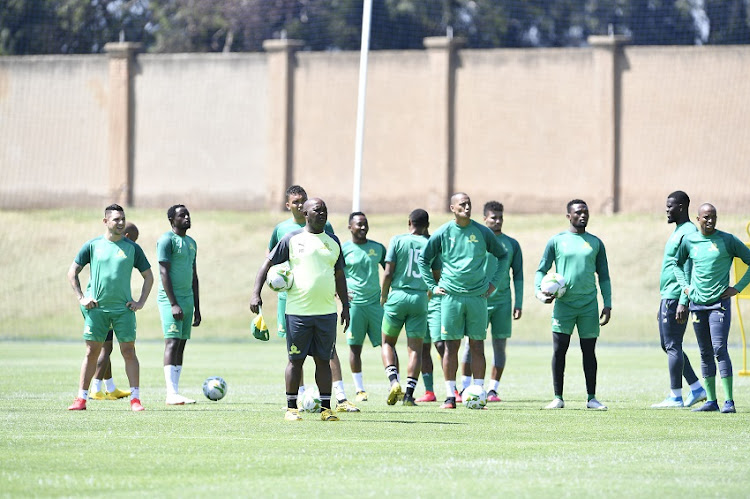 Pitso Mosimane and his players during the Mamelodi Sundowns training session and press conference at Chloorkop on March 05, 2020 in Pretoria, South Africa.
Image: Lefty Shivambu/Gallo Images

Mamelodi Sundowns coach Pitso Mosimane is planning an overhaul of his squad during the off-season and intends to bring in four to five new players to Chloorkop.

Some members of squad are on the wrong side of 30 and look set to make way for new arrivals as they are fast approaching the twilight of their careers.

“We need to empower and freshen up the squad now‚ maybe with four or five players.

"The team has been together for some time now and we have been quiet on the transfer market for the past two to three years‚” said Mosimane.

“If you check over the last three years‚ I don’t know how many players we have signed‚" Mosimane said.

"Last year we only signed Sammy (Seabi) and Mauricio (Affonso) but unfortunately Affonso has been mostly injured.

Sundowns have already whipped out the cheque book as they will welcome 23-year-old goalkeeper Jody February to deputise for Onyango and Mweene‚ 21 year-old midfielder Grant Margeman will join from Ajax Cape Town while George Maluleka arrives from Kaizer Chiefs.

Defender Nyiko Mobbie is expected to stay on loan at Stellenbosch FC next season and a decision on whether Sundowns are going to exercise their option on on-loan Jeremy Brockie’s contract will be made closer to the end of the season.

“In the past‚ we used to sign a lot of players and that was the mentality then.

"I also did it when I first joined the club by signing eleven players in my first season.

"The reason I did it that was not because I wanted to do what Sundowns have always been doing‚ but it was because I needed the players who fitted in to what I was going to do.

“I asked for players who could do things differently‚ especially in scoring goals. I found Katlego Mphela scoring goals and I brought in players like Cuthbert Malajila and Katlego Mashego as the seasons went on.

"We moved to Leonardo Castro‚ Khama Billiat‚ Sibusiso Vilakazi‚ Percy Tau from the youth and Sirino. It has always been about players who will come and help you to score the goals.”