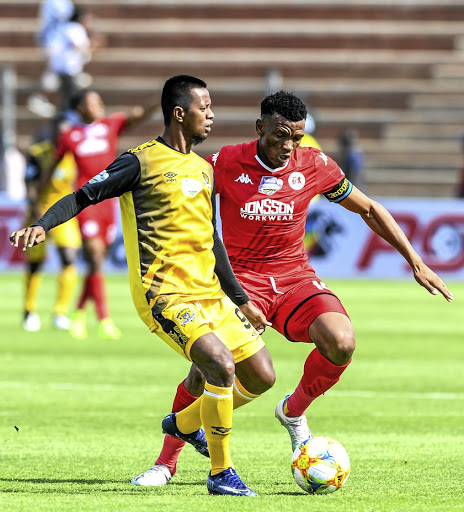 Black Leopards midfielder Andriamirado "Dax" Andrianarimanana is relieved that he's not feeling the effect of his suspension.

The Covid-19 pandemic has allowed the Madagascan international not to miss the action as the matches have been suspended.

Dax was banned for four months after his move to Kaizer Chiefs in 2018 was deemed illegal by Fifa in February. Fosa Juniors, his native former team, then complained to Fifa after the 28-year-old left them for Chiefs without compensation.

With the PSL likely to continue until the end of June or July, this means Dax will be back in action as he would have completed his ban by then. His ban came into effect in early February and will be completed around June.

"I have been training every day [since the ban] to make sure that I'm fit and ready," Dax told Sowetan.

"I didn't go home. I'm here in South Africa and I have been training alone. We just have to wait and see what will happen with the season going forward.

"If I play again I will be very happy."

Dax was also ordered to pay close to R640, 000 in compensation cost he must share "equally and severally" with his former team Chiefs, according to Fifa's ruling.

Asked if he had already made a portion of the payment as per the Fifa directive, the midfielder was reluctant to comment.

Former Kaizer Chiefs midfielder Andriamirado ’Dax’ Andrianarimanana is likely to have served his four-month suspension by the time AmaKhosi’s appeal ...
Sport
2 years ago

"No, I don't [want] to talk about it; stop it please my brother," Dax, who is more fluent in Malagasy and French, said.

Just like many other Premiership players who have expressed difficulties of training alone, Dax also echoed their sentiments.

"You don't touch the ball, no big training field [in my yard] so it is very difficult.

"I'm still a Back Leopards player and I will still be playing for them next season. It was very frustrating for me (the ban)... a big problem."

Leopards coach Allan Clark said Dax would be available for selection once his ban was completed as he has been hard at training.

"He is still part of the squad, he had been training with us," Clark said yesterday.

"He trained with us every single day [before the lockdown] and obviously when his ban is over like Fifa has said he is allowed to play."