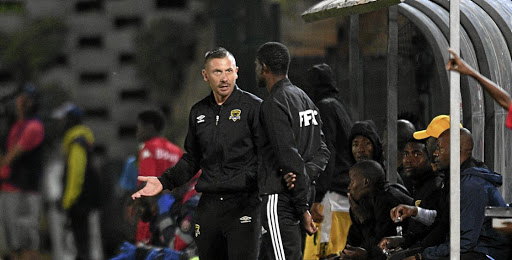 Alan Clark, coach of Black Leopards, has one of the oldest squads in the league. / Sydney Mahlangu/ BackpagePix

Black Leopards are the only SA premiership side who haven't fielded any player under the age of 23 in the league this season.

Xolani Ndlovu, 24, is the youngest player to have played for Leopards in the league this season. The left-winger was 23 years and nine months at the start of the current campaign.

Does this mean Lidoda Duvha lack faith in youth?

"I don't think it's a matter of the club not believing in youth," Clark told Sowetan yesterday.

"It's a difficult one for me to answer because I am the fourth [Leopards] coach this season [after Lionel Soccoia, Luc Eymael and Johnson].

"The squad I have doesn't have enough under-23s. I think we only have one or two."

Clark insinuated their battle to avoid relegation has also made it difficult for them to throw in younger players. Leopards are bottom of the table on just 20 points, with six games to go.

"We have had a couple of youngsters on the bench but we just have not been in a situation where we're able to get them on the pitch."

Black Leopards striker Robert Ng'ambi has backed his compatriot Gabadinho Mhango of Orlando Pirates to become the first Malawian in the PSL era to ...
Sport
1 year ago

Thuso Phala has distanced himself from his mother's utterances that he has retired from football.
Sport
1 year ago

"It's really not the case of us not wanting to play the U-23s. It's because, [for] one, we don't have many in the squad [and] two, our situation on the log is dire."

Clark argued he's a big believer in youth, citing his spell with Platinum Stars, where he was a MultiChoice Diski Challenge (MDC) coach.

"At Platinum Stars I promoted eight MDC players to the first team. That's where players like [Kobamelo] Kodisang, [Sibusiso] Mabiliso and many more came up."

"I took over at the start of the season, so I have just started. At the end of the season we'll promote six players. Next season our first team will have a lot of good players from the MDC," Bobe said.

Stellenbosch's Ally Msegi is the youngest player to have played in the PSL this season, making debut at 18 years, two months and 20 days in March.

Maritzburg's Bongokuhle Hlongwane is the youngest scorer in the league this season (at 19 years, eight months and eight days).