Would I be sane not to extend with Ofori?: Kadodia on star's link to Sundowns, Pirates 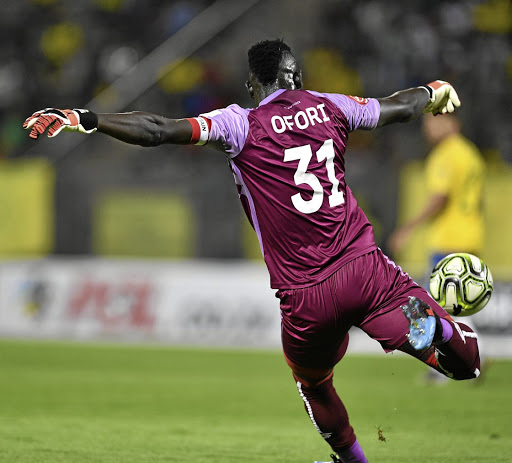 Maritzburg United chairman Farook Kadodia is bemused at the media speculation of a potential move by goalkeeper Richard Ofori to Mamelodi Sundowns or Orlando Pirates in July, as the Ghana international signed an option to extend his contract at the KwaZulu-Natal club in January.

Kadodia did, however, stress that Maritzburg will be open to an offer from a rival club to buy Ofori in the next off-season, should the price be right.

Press reports had been that Sundowns had the inside lane to sign Ofori when his contract ended in June. However, Kadodia has clarified that an option to renew the keeper’s contract to June 2021 was exercised between the KZN team and the player in January.

Kadodia was annoyed at the speculation that has surrounded Ofori’s future at United.

"We didn’t have to make it a media story that Ofori extended the option. The club did that in January, and we didn’t need to make it an issue - and now the media want to make it a story, but this Ofori situation was never a story,” he told TimesLIVE.

“His contract only ends in June next year. I don’t know if the media want to speak as spokesmen for Pirates, Chiefs and Sundowns. The clubs themselves must come to us. But let’s be fair - would I be in a sane mind not to take the option to extend with Ofori when he’s been one of our prized players?”

Kadodia admitted that the option to extend also prevents Maritzburg from losing Ofori for free in June - and now there is a possibility to sell the goalkeeper, if the price is right.

We’re not going to deprive the player if there is an offer on the table.

“The reality is that our success, and the reason why we survive, comes from trading players now and again.”

Kadodia said he would also be pleased to keep Ofori if no suitable offer comes.

“Even if he wants to negotiate a new contract with us for two or three years, I’ll do it,” he said.

“At the moment I don’t need to make an issue of it, because the first thing I had to do was just make sure I had protection of Ofori in January, with the extension.”

Ofori, Ghana’s number 1, has seen his reputation burgeon in the PSL with his performances for United.

Kadodia said the keeper initially joined Maritzburg from Ghana’s Wa All Stars in June 2017, rather than a bigger PSL club, with a view to being guaranteed game time and earning a move to Europe. He said he believed Ofori’s first-choice move from Pietermaritzburg would still be outside Africa.