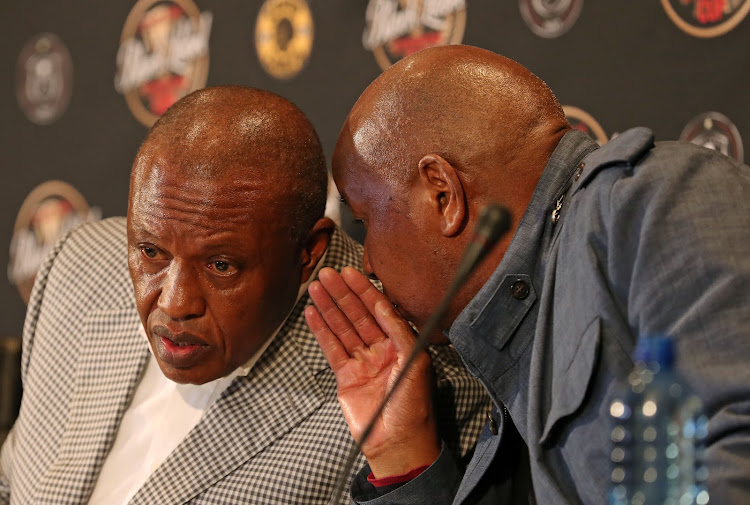 A file photo of Premier Soccer League and Orlando Pirates chairman Irvin Khoza with the chairman of Kaizer Chiefs Kaizer Motaung at a press conference. The Premier Soccer League has been criticized for its alleged lucklustre planning for the Ellis Park disaster which claimed the lives of 43 fans and injured more than 150 more at a packed Ellis Park Stadium in 2001.
Image: Muzi Ntombela/BackpagePix

Kaizer Chiefs and Orlando Pirates’ historical role contributing together in times of disaster‚ and what each Premier Soccer League (PSL) club can afford‚ were given as the reasons for the Soweto giants combining with MultiChoice to contribute essential health supplies to the government on Wednesday.

The announcement of a contribution by the pay-TV channel and the two clubs of personal protective equipment (PPEs) was made in a televised press conference by MultiChoice group chairman Imtiaz Patel‚ Pirates chairman Irvin Khoza‚ Chiefs chairman Kaizer Motaung and Health Minister Zweli Mkhize.

The donation was made to help combat the outbreak of the coronavirus (Covid-19) in South Africa.

Motaung and Khoza were asked why it was only Chiefs and Pirates who were part of the project‚ and not the rest of the PSL’s clubs in the 16-team Premiership.

“I think it’s important for us to recall the history. Because what happens is that‚ as much as we are fierce rivals on the pitch‚ in the early 1980s we decided that there’s more to it than just playing football‚” Motaung responded.

“ ... We started the Charity Spectacular [preseason tournament]‚ which contributed back to the communities.

“In addition we have had other initiatives where we contributed quite significantly. One that I want to highlight was that during the height of political violence in KwaZulu-Natal we were engaging with the leadership‚ and we came up with a concept which Doctor Khoza alluded to‚ that our supporters mingle as if they are not rivals.

“Because of the height of violence in KZN we‚ with our sponsor Vodacom [who sponsor both Chiefs and Pirates]‚ started the Vodacom Challenge. The idea behind it was twofold – to address the violence in stadiums‚ and also the violence in that region.

“We launched the Challenge in KZN to try and educate the people‚ and show them that as much as we [Chiefs and Pirates] are rivals on the field‚ we all come from the same communities. We used football to bring people together‚ forgetting about what was happening.”

Khoza‚ responding to the same question‚ said: “The majority of clubs are family businesses. They are small- or medium-sized.

“But coming to the question of the contribution‚ because we are in a state of war it’s not a question of how much you can give. Anybody can give what they can afford.

“But again‚ because of the understanding that the situation that we are in requires a contribution‚ they are contributing in a manner and size which they can afford.”

Minister Mkhize announced that Wednesday’s new number of confirmed cases of Covid-19 in South Africa was 2‚506‚ up 91 from 2‚415 on Tuesday.