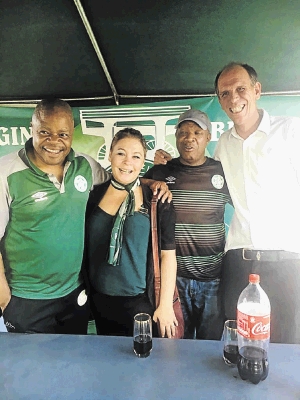 As local businessmen Lebo Mokoena and Tim Sukazi are believed to be vying to buy cash-strapped Bloemfontein Celtic, the national supporters club chair, Mabena Pule, has disclosed the Siwelele faithful would prefer Mokoena over Sukazi, fearing the latter would relocate the outfit to his home province of Mpumalanga.

Celtic tried to sell its top-flight status a number of times in the past, but with no success.

Two years ago fans revolted and trashed the Bloemfontein streets after suspicions the club would be sold to someone outside the Free State.

Bloemfontein Celtic have become the first Premier Soccer League club to concede they might have to ask their players to accept salary cuts as a ...
Sport
2 years ago

Pule has made it clear supporters wouldn't accept Sukazi, vowing to fight with whatever they have as they think the Galaxy owner would move Celtic to Mpumalanga.

"Lebo is from Bloemfontein and if he buys the club, it'll remain in Free State, so that would be acceptable. But for Tim, no, we won't allow it," Pule told Sowetan yesterday.

"Tim is from Mpumalanga and he has a lot of support there. He'd take the club to his province, so we don't want it to be sold to him. We will fight with all we have. I hope bra Max Tshabalala [the club's chair] sells to Lebo."

While Sukazi wasn't keen to comment, Mokoena dismissed reports he wants to buy the club.

"Yes, I love Celtic as someone from Bloem but I don't know why people say I want to buy the club. My objective is to help the team secure financial support after the [coronavirus-enforced] lockdown, that's all," Mokoena said yesterday.

Meanwhile, Tshabalala hung up after hearing it was Sowetan calling him. However, the club's chief executive Khumbulani Konco hinted that the sale of the club was back on the cards.

"Everything is for sale, even you. Someone can buy you to work for them," said Konco.

Baroka coach Dylan Kerr would gladly play the semifinal and the final of the Nedbank Cup in one day if it were decided that way.
Sport
2 years ago

With the Premier Soccer League’s Absa Premiership and GladAfrica Championship shut down due to the coronavirus breakout some 2‚000 stadium security ...
Sport
2 years ago
Next Article