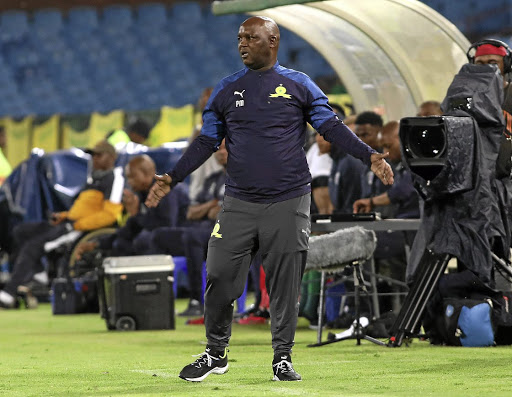 Pitso Mosimane says the Premier Soccer League should consider doing away with pre-season for the next term, should the current hiatus triggered by Covid-19 stretch for longer than a month.

There has not been any local football action since March 15 as the PSL was forced to suspend games following the coronavirus-induced lockdown.

Next week will mark a month since the suspension of matches and Mosimane, the Mamelodi Sundowns coach, felt it would be pointless to insist on the usual break in the winter.

"I think we should do away with pre-season [for the 2020/2021 season]. Once all this is over, we should be back on the pitch then start the new season almost immediately. Players usually require four weeks' break for pre-season. They are having that recess now," Mosimane said.

The four-time Absa Premiership champion suggested the PSL should only offer a two-week break to allow for transfers to take place, after which the new season should begin, to make up for lost time.

"We should get a one- or two-week break for player movements. It shouldn't be more than 10 days, really."

While other leagues in Europe have decided the way forward as a result of the ongoing Covid-19 conundrum, the Premier Soccer League has yet to ...
Sport
2 years ago

Mosimane's players, like the rest of the PSL, have been keeping fit at home amid the lockdown, but he says Covid-19 exposed SA as far behind in terms of technology.

"I saw players at Spurs and Bayern [Munich] engage in a co-ordinated training, all from their homes, at the same time. The coach could see everyone. They were all doing the same thing. We don't have that type of technology here. We don't have those TV screens. Some European teams sent gym equipment to their players to utilise at home. The crisis we have now shows we can improve in that regard."

Sundowns are four points behind Kaizer Chiefs in the Premiership standings with a match in hand and, while Mosimane believes a third league title in succession is feasible, he's braced for the unknown when the action resumes.

"It will be difficult for all the teams. This break came at a good time for others who were struggling, but we had found some rhythm. So now when we restart you could have three scenarios: continue where you left off, be better, or deteriorate. I'm not sure how my team will react because I'm not training the team. I have to trust players to be professional and follow the programme we've given them. We could have a situation where we'll play three games in a week.

"I would like the PSL to inform us timeously about when the games resume so we can go back and prepare."