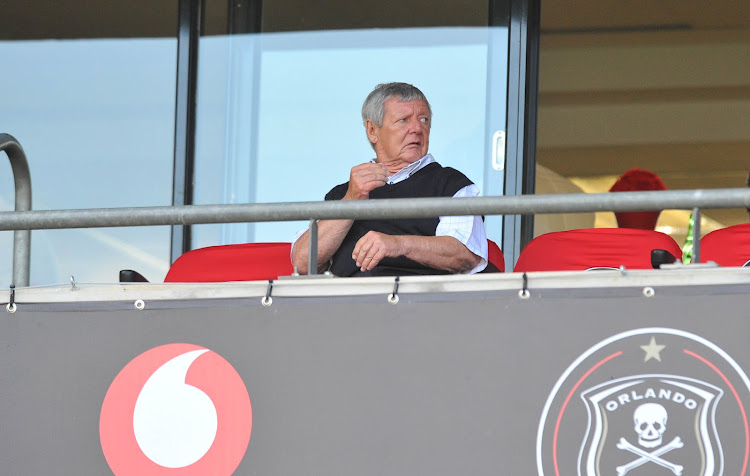 Clive Barker, 75, sits in the VIP suits at Orlando Stadium in Soweto during the Absa Premiership match between Orlando Pirates and AmaZulu on January 25 2020.
Image: Sydney Mahlangu/BackpagePix

Former Bafana Bafana coach Clive Barker believes that his squad would have won the World Cup if he had Benni McCarthy leading the attack of the strong side that dominated in the 1990s and even won the Africa Cup of Nations in 1996.

McCarthy made his Bafana debut against the Netherlands in 1997 but South Africans got a true glimpse of his predatory instincts when the then 20-year-old striker starred in the 1998 Africa Cup of Nations in Burkina Faso and finished as the tournament's joint top scorer along with Egyptian Hossam Hassan on seven goals.

Barker said he believed that the player who would later score South Africa's first-ever Fifa World Cup goal (at the showpiece in France in 1998)‚ and who became the first South African to win a Uefa Champions League winners' medal (with Portugal's FC Porto)‚ was the missing piece of his Bafana jigsaw puzzle.

“Had we had the young Benni McCarthy‚ I think we may have gone on to win the World Cup‚ who knows‚" Barker told Barker told Marawa TV.

"I think I am entitled to say that. He had the ability to score goals‚ he was a fabulous player and he would have given us the consistency up front.

"This is not to say that we didn’t have consistency.

"We had players like Mark Williams‚ Shaun Bartlett and Phil Masinga‚ who the boo boys got to until he scored that goal (against Congo) that qualified us for the (1998) World Cup.

"They were great goals scored by top class players.”

Barker said at some stage in the 1990s his Bafana team was among the best national sides in the world.

“I think there were times‚ just a little bit‚ where I thought they were nearly the best team in the world‚” Barker said.

“You have nights where everything went right. The finishing was good and clinical and you must remember that during the Cup of Nations in 1996 they scored 12 goals which is a lot of goals at any level.”

Barker‚ who helped Bafana to qualify for the World Cup in France in 1998‚ added that they dominated illustrious sides like France‚ Brazil‚ Germany and England.

“There were so many sides that we dominated and we were in control. I remember Mark Fish saying to me that I really think we can win the World Cup and he honestly believed that.

"That’s exactly where we were‚ we were in that level that players believed sincerely that we can win the World Cup."

Barker said Bafana's dominant display against Ghana in the 1996 Africa Cup of Nations at the old FNB Stadium stands out as one of the best national performances he's ever seen.

Bafana turned on the screws on the night and won that game 3-0 courtesy of a brace from the legendary John "Shoes" Moshoeu and a Shaun Bartlett strike.

“People ask me which is the best game I have watched‚ and I say the Ghana game at the Cup of Nations in 1996 because they were the best side that we came up against in the tournament‚" he said.

"I thought we were magnificent on that night and I have no doubt that we could have beaten any team in the world."

The veteran coach also recalled a friendly match Bafana played against France in Lens at the Felix Bollaert stadium in 1997.

Bafana performed exceptionally well but eventually went 2-1 after Bartlett had put the South Africans ahead just before the halftime break.

The visitors had appeared to be headed to a win until Stephane Guivarc'h‚ who was on debut‚ and then substitute Ibrahim Ba found the net in the second half to secure the win for the French.

“We were so much in control and you must not forget that the match against France away from home‚" recalled Barker.

"It was (pouring) with rain and I thought the game was going to be called off.

"We went out there that night and I remember the press coming to me afterwards and asking me who is the little man in the middle of the park. I said 'his name is John Moeti'.

"They asked how old he is and I said I think he is between 20 and 22‚ they all laughed when they realized he was not that age.

"He was the orchestra and leader in that game. He was also magnificent and even against England.”