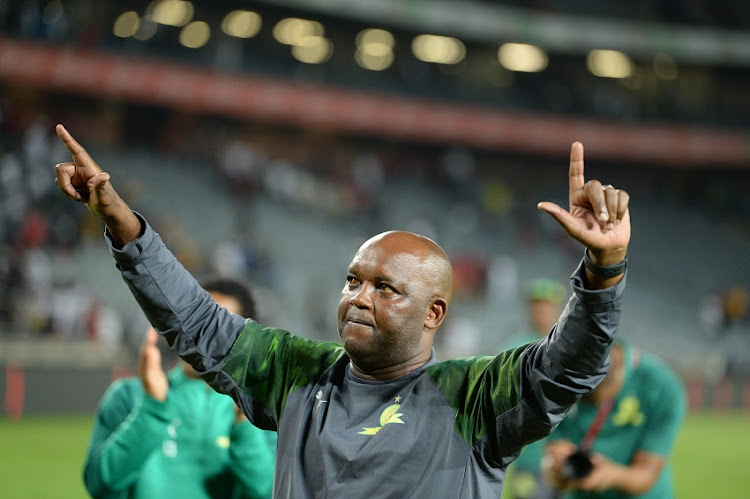 Clive “The Dog” Barker has said that Pitso Mosimane is his favourite to become the next Bafana Bafana coach.

Barker‚ who led Bafana to Africa Cup of Nations success in 1996‚ said Mosimane‚ who guided Sundowns to Caf Champions League glory in 2016‚ will command respect from players because of his achievements‚ especially his high degree of success at Mamelodi Sundowns.

Mosimane has repeatedly urged South Africans to support incumbent coach Molefi Ntseki who replaced Stuart Baxter last year after an unsatisfactory showing at the 2019 Africa Cup of Nations in Egypt.

“Pitso has done a marvellous job at Sundowns but it depends on what the current job does‚” said Barker in an interview with Robert Maraw ion his internet-based on Marawa TV this week.

“I would think that he is the next man to get a go. I also think that Gavin Hunt will push him all the way [as Mosimane’s assistant-coach].

“He [Mosimane] has done a fantastic job in Africa where he is very popular across the continent‚ and he will have the respect of the players. If I had a choice to make‚ I will go with Pitso as No 1 and Hunt as No 2.”

Mosimane won the 2016 Caf Champions League with Sundowns‚ plus four Absa Premiership titles in his eight years at the Brazilians.

Asked why Hunt‚ who has achieved a lot of success in the league‚ has been overlooked over the years for the top job‚ Barker joked that perhaps the Bidvest Wits coach he has “done something wrong”.

“I am not quite sure why he has been overlooked in the past – he must have done something wrong. But he is a terrific coach. He was born in a family of people who know how to coach football teams and he will get there eventually‚” Barker said.

He added that Bafana need to build the team around Sundowns’ star midfielder Themba Zwane‚ who Barker coached at Mpumalanga Black Aces and who the ex-coach has often said reminds him of the Kaizer Chiefs and Bafana legend Doctor Khumalo.

“Build the team around Themba Zwane. In different ways he reminds a lot about Doctor Khumalo‚” Barker said.

“He is not as good as Doctor but he creates things and scores goals‚ he gets himself in the box where he is very good. I was delighted to watch his career and I think we can build around him.”

“I would have loved it if someone came close to winning the Cup of Nations. People are tired of hearing the success of 1996‚” he added.