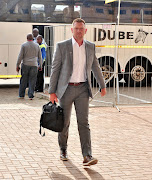 Maritzburg United coach Eric Tinkler says it is the intensity of his team’s training sessions‚ plus a hardened mentality from fighting relegation last season‚ that have been the keys to the workaholic little KwaZulu-Natal team’s charge up the Absa Premiership table.

After guiding Orlando Pirates to the 2015 Caf Confederation Cup final‚ taking Cape Town City to third place and the Telkom Knockout trophy in their first season of existence in 2016-17‚ and SuperSport United to the 2018 MTN8 final‚ Tinkler’s emerging coaching reputation has continued to burgeon at Maritzburg.

This season‚ after a poor start‚ the team from KZN capital Pietermaritzburg have surged to losing 1-0 to Mamelodi Sundowns in the Telkom final and fifth place in the league before the national shutdown due to the coronavirus outbreak.

“I think it’s the fact that I had a preseason with them. That’s point No 1. Point No 2 – 14 new signings. It’s going to take time for them to understand and adapt and learn to play as a team‚” Tinkler said of the manner in which United have gained steam in 2019-20‚ notching five league wins in succession before the lockdown.

“I think it wasn’t a case of us playing poorly in that first five games. We could have won all of them‚ with how well we were playing and the opportunities we created.

“But we just stuck to what we believed in and the players continued believing in what we were doing. And I think the fact that we had a group that faced what we had the season before strengthened them in that mentality.”

Their squad still include a number of the players who played to a similar workaholic‚ well-organised‚ counter-attacking style in Maritzburg’s most successful season under Fadlu Davids in 2017-18‚ where they reached the Nedbank Cup final and ended fourth in the PSL.

Tinkler was asked how he gets his players to perform to such a high work ethic.

“Because I like to ensure that we play the way we train‚” he said.

“So you’ve got to be very forceful when it comes to the training sessions and their intensity. Because if you can replicate that‚ it needs to become mechanical.

“Or it has to become muscle memory‚ if you like. You transfer it to the game.

“We rely a lot‚ obviously‚ on ‘Burger’ [Gerhard van der Merwe]‚ our fitness coach. I have to compliment him because the demands are very high.”

Maritzburg had 39 points from 24 games before the lockdown.