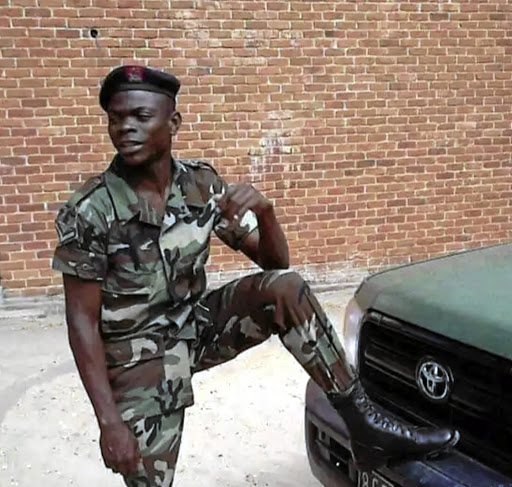 Richard Mbulu of Baroka FC is a soldier in Malawi. /Gallo Images

Trained soldier and Baroka striker Richard Mbulu has advised residents to abide by the regulations of lockdown as more incidents of clashes emerge between law enforcement officers and civilians.

Some members of the SANDF who are deployed in townships during the 21-day lockdown have been accused of using unnecessary force. Videos doing the rounds on social media have shown some soldiers assaulting civilians.

Mbulu, who is a soldier in his country of Malawi, shared his thoughts on the matter.

"I think the military was hard on those people who were misbehaving and not following the order to stay home," Mbulu told Sowetan.

"Some people have been drinking and doing other things that are not allowed. As we all know, this virus is very dangerous. So, the soldiers sometimes need to be harsh to protect everybody. The job of a soldier is to protect citizens."

The 26-year-old corporal joined the Malawian military six years ago. He played for the Malawi Armed Forces College and was their top striker.

He remains a soldier through and through. "I am still a solider, it's not like I have retired. Whenever I go back home I report to the military and they tell me what to do.

"Even when I retire from football I will be a soldier full time. I joined because my father is also a soldier, so that was my motivation."

Mbulu adds that fortunately there have been no cases of the coronavirus in his home country. "In Malawi there are no issues with the virus. There are no infections but of course, people are concerned about the spread of the disease."

Malawi is one of the few countries that haven't reported a Covid-19 case. President Peter Mutharika declared a state of disaster on March 20, where public gatherings were banned and schools closed.

The expectation was that Bloemfontein Celtic would take stern action against midfielder Teboho Potsane for impersonating a soldier, an offence which ...
Sport
2 years ago

The DA is calling on military ombudsman General Vusi Masondo to investigate alleged gross violations of the military mandate and Bill of Rights by ...
News
2 years ago

Minister of defence Nosiviwe Mapisa-Nqakula has cautioned members of the South African National Defence Force (SANDF) against their heavy-handedness ...
News
2 years ago
Next Article