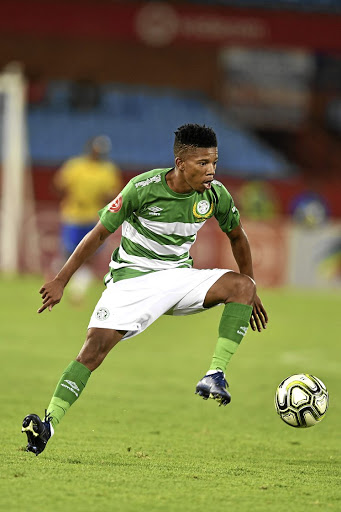 Teboho Potsane of Bloemfontein Celtic is likely to escape punishment after impersonating an SANDF soldier and joking about killing a person. /Lefty Shivambu/Gallo Images

The expectation was that Bloemfontein Celtic would take stern action against midfielder Teboho Potsane for impersonating a soldier, an offence which directly undermined SA's constitution amid the Covid-19 pandemic.

As fellow Premier Soccer League (PSL) players all over the country post themselves training, Potsane was instead seen in the video which went viral on various social media networks wearing camouflage, impersonating an SANDF soldier.

In the video, the 26-year-old midfielder joked about killing a person before he started wearing boxing gloves. "You see, those who would be busy roaming the streets while we are busy here... wait and see what I'm going to do to them," Potsane said in the video.

"I am training guys, I am not playing around and I'm not going to show you any mercy. I'm going to kill someone."

Celtic CEO Khumbulani Konco dismissed suggestions that the midfielder was facing a suspension from the club, but did admit it was an error of judgment from the lad.

"It was a mistake man; it is a small mistake, he didn't know that. But everyone knows that wearing the police or soldier uniform is a problem, so it is already sorted.

"We are not going to fine him or whatever."

It remains to be seen if Celtic will sweep such behavior under the carpet as it's deemed reckless by any standards given the nature of the Covid-19 pandemic.

Government has already indicated people who pass around pranks during this period will face the might of the law.

With a handful of professional athletes having tested positive for the coronavirus, it remains to be seen whether these sportsmen and sportswomen ...
Sport
1 year ago

PSL players will still be paid salaries during lockdown