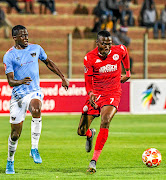 A rocky relationship between Tendai Ndoro and coach Owen da Gama could spell the end of the striker's stay at Highlands Park.

It is understood that the two are not on good terms, hence the striker has seen limited game time of late. With his contract coming to an end in June, Ndoro looks set to be on his way out from the Tembisa-based side.

In the 14 matches he has played for the Lions of the North in this campaign, the 34-year-old managed to score only two goals. This is perhaps what any club would not have hoped for in returns, especially for an experienced striker like him.

The last time Ndoro made an appearance for Highlands was against Kaizer Chiefs in their 0-3 defeat on January 8 at FNB Stadium.

Since then, he has not been in the match-day squad and chances of him staying on at Highlands look slim.

"It's true they don't get along with the coach anymore, I don't really know the reasons," a source said.

"The coach prefers to play [Peter] Shalulile more, with Rodney Ramagalela still in the picture, I doubt if they will renew his contract."

Highlands director Sinky Mnisi was reluctant to comment, only saying they will entertain contract issues at a later stage.

"We are not going to be talking contract issues now, I don't want to lie to you," Mnisi told Sowetan.

"Not only Ndoro, all other players that we have, but we've also not discussed anything about contracts. I think in terms of contracts and all that, the team will sit down at the appropriate time to deal with that.

"One, we need to focus on this coronavirus... it is a national crisis. There is no way we can be commenting on contracts at the moment."

Veteran midfielder Reneilwe "Yeye" Letsholonyane also looks set to leave the club when his current deal ends in June. Like Ndoro, he has also been watching the team from the sidelines a lot recently.