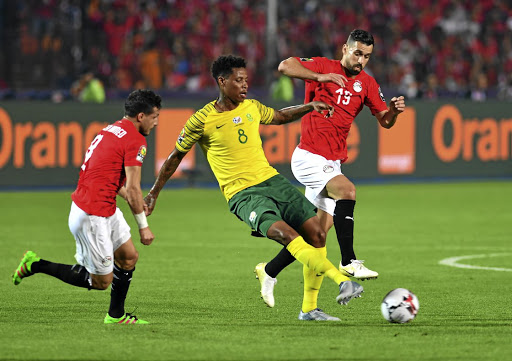 Bongani Zungu, in action against Egypt during 2019 Africa Cup of Nations, was left out of the Bafana squad to meet São Tomé and Príncipe in the 2021 qualifiers. Coach Ntseki says he wasn't snubbed.
Image: Ahmed Hasan / Gallo Images

There appeared to be some friction in the Bafana Bafana setup after star midfielder Bongani Zungu openly questioned his exclusion from the most recent squad, but coach Molefi Ntseki has now cleared the air on the matter.

Two weeks ago, Zungu was omitted from the 25-man squad that was due to face Sao Tome and Principe. In reaction, the Amiens SC star posted a cryptic response on Twitter, saying "Wow", and also reacted with a few emojis.

Social media was abuzz with speculation that the two don't see eye to eye. Ntseki, however, has dismissed the suggestion that there was discord with the player from Duduza, Nigel, on the East Rand.

"People sometimes ignore things continuously and unconsciously. It's a fact that if we have 100 best players in the country and we have to select 25, there will be some who will be complaining and questioning why they are not selected," Ntseki told Sowetan.

Bongani Zungu has appeared to react to the news that he was left out of Bafana Bafana coach Molefi Ntseki’s squad for this month’s 2021 Africa Cup of ...
Sport
2 years ago

Injuries have been a big stumbling block when the Bafana Bafana technical team wanted to select Kaizer Chiefs midfielder George Maluleka in recent ...
Sport
2 years ago

"We have tried to choose the best for this game based on the profile of the opponent. It's not like the players who fall outside of the 25 chosen players are not good enough for the national team.

"It's not to say that they will not have a place in the team in future."

The squad included a few surprises, including the return of keeper Itumeleng Khune and Andile Jali, while Gladwin Shitolo, Thabo Matlaba, George Maluleka and Thabiso Kutumela got rare call-ups.

At the squad announcement, Ntseki revealed that he had created a pool of about 50 players of the best SA players to choose from.

The former under-17 national team coach said those who were chosen must be given support.

"As South Africans we need to support the selected 25 and give them the confidence that they are representing all of us.

"Those other players who are not selected, their time will come. Let us give those selected the faith that they can deliver for their country."