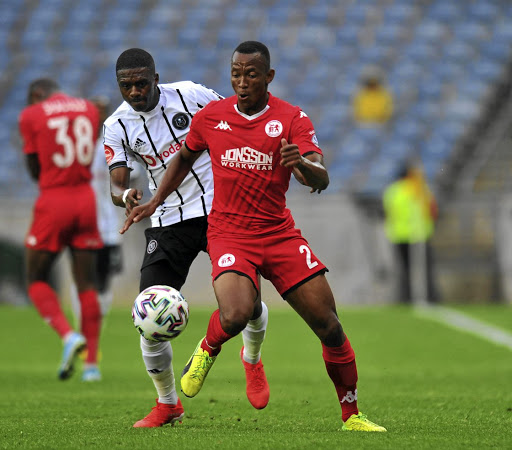 Sifiso Mbhele of Highlands Park fends off a challenge from Abel Mabaso of Orlando Pirates in a league match on January 18.
Image: BackpagePix

It's the fear of of being unemployed that is fuelling Sifiso Mbhele's determination to succeed in his stellar season with Highlands Park.

Mbhele joined Highlands at the beginning of the season from Free State Stars after they were relegated to the GladAfrica Championship.

The defender had just signed a three-year deal with Ea Lla Koto before they were relegated, and his contract was then terminated, rendering him clubless and without income.

Frustrated at being unemployed at the time, he sat down with his manager Ratshibvumo Mulovhedzi to map the way forward.

Luckily for him it wasn't long before he was invited to training by Highlands Park coach Owen da Gama during the pre-season.

"I don't want to see myself in the situation I faced at Free State Stars.

"After we were relegated I just saw a dark cloud hanging over me," Mbhele said.

"There were teams who were interested in me, but most of them were from the GladAfrica Championship.

"At the end of the day things came good for me. Coach Owen invited me to come to their pre-season and the rest is history."

The 32-year-old has been enjoying a stellar season with the Lions of the North. He has played 23 matches in all competitions.

Affable Highlands Park coach Owen Da Gama has chalked up their Wednesday's 3-0 loss to Kaizer Chiefs to their rather below-par defensive work, ...
Sport
2 years ago

His ever-improving performances have forced Highlands to ward off possible suitors and extend his current contract by two years.

"If you have faced that kind of a situation where you were relegated with your contract terminated. and you [are] given a second chance, you need to grab it with both hands," Mbhele continued.

"You must focus on the opportunity you were given and push more so you can have more seasons in the PSL.

"At the moment I'm happy with my performance, this being my first season at Highlands. We have not finished the season yet, but I still want to do more because as a player, you want to play more games so you can grow your profile."