Molefi Ntseki rues his luck as another Bafana camp fails 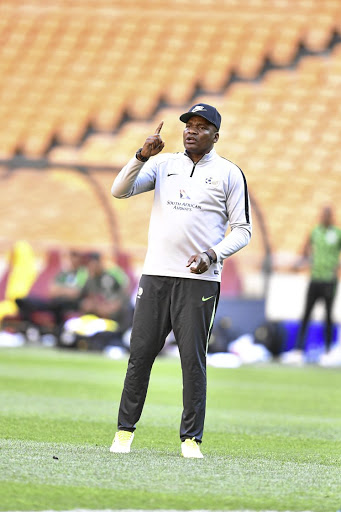 Bafana Bafana coach Molefi Ntseki was meant to hold his first training session with the team yesterday at the Sandton Sports Club. But instead the tactician was at his office at Safa House re-evaluating plans.

Ntseki was supposed to conduct his fourth training camp where the team would have faced 181st ranked São Tomè and Prìncipe in qualifiers for the 2021 Africa Cup of Nations (Afcon). The first leg was scheduled to be played at the FNB Stadium on Friday, with the second leg on the island nation next Tuesday.

However, everything has come to a standstill and games have been called off due to the global coronavirus pandemic. "One is obviously disappointed because there are a number of things I wanted to do with the players during our sessions," Ntseki told Sowetan.

Safa have welcomed the Confederation of African Football’s decision to postpone this month’s round of 2021 Africa Cup of Nations qualifying matches, ...
Sport
2 years ago

Bafana Bafana’s two Africa Cup of Nations qualifiers against Sao Tome and Principe, and all the other Cameroon 2021 qualifiers this month, have been ...
News
2 years ago

"We have had limited time working the players since I have been in charge so the more time spent with the team working on our philosophy would have been good."

The first time a camp had to be abandoned since Ntseki took over was in September when the friendly against Zambia was called off due to xenophobic violence in SA. Replacement opponent Madagascar later also withdrew.

The next seven days would have been Fifa week for international fixtures. With football suspended in most parts of the world, teams can only wait and see what happens in future.

Plans were already afoot for Bafana to fly on a chartered plane to São Tomè. The back-to-back games were going to give clarity if the 50-year-old got it right after some surprise selections including Thabo Matlaba, Thabiso Kutumela, George Maluleka and Gladwin Shitolo to name a few.

"It's really been disappointing to have some disruptions during my reign as Bafana coach. But what else can we do? We just hope and pray that things come right," he said.

Bafana have played three games under Ntseki with the first being a 2-1 friendly win over Mali, while the other was a 0-2 loss to Ghana and a 1-0 win over Sudan in the 2021 Afcon qualifiers.